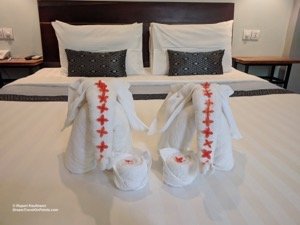 Hotel Five.S Kampot offers friendly service and outdoor/indoor bathrooms you’d expect from a five-star luxury resort for the price of a budget hotel. You also get a small pool and good breakfast, as well as free bicycle rentals to explore the town and countryside. All that makes it an easy recommendation and my favorite hotel in Kampot!

Location: The Kampot Five S Hotel is just North of the down center. While I initially hesitated to stay there due to the location, Kampot is such a small town that you can walk anywhere in town in a few minutes. It’s a five minute walk to the Giant ibis bus station, your best choice to go from/to Kampot and the river front is ten minutes. It’s on a quiet side street, so you won’t have any traffic noise here. You don’t get the scenic river views here though that other hotels advertise with! 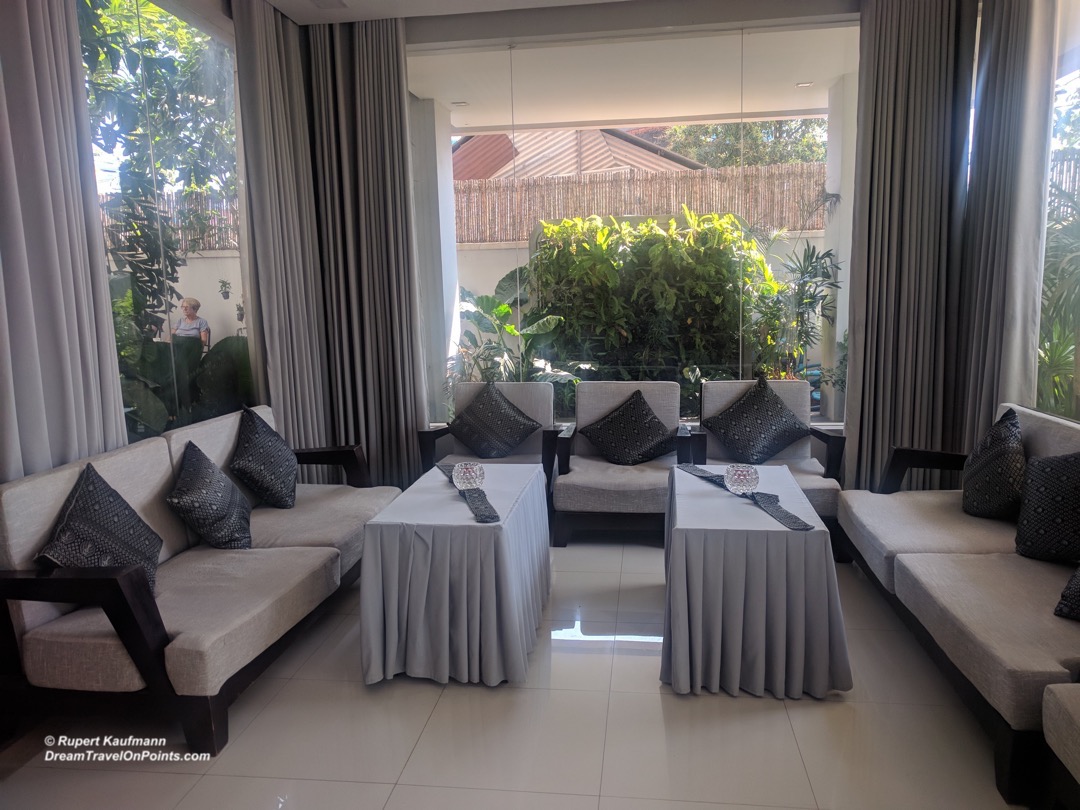 Service: The front desk was exceptionally professional and helpful, even by high Cambodian standards. I was welcomed warmly to the hotel, got all the information about the hotel I needed and was shown to my room, a rare courtesy outside a luxury hotel.
Housekeeping did a thorough job each day to present a spotlessly clean room and restocked all supplies and towels. The restaurant staff was just as attentive and friendly, for an all around pleasant experience at the Hotel FiveS.

Room: The rooms at the Hotel FiveS Kampot are the standout feature, offering one of the nicest bathrooms I’ve ever seen outside a luxury resort – it’s an ingenious design, turning a challenge into a feature: The downstairs standard rooms at the FiveS face the wall to the neighboring building and instead of creating “fake” windows that look out onto that wall, the bathroom has a large skylight. The bedroom has a large window into the shower area under the skylight, flooding the whole room with daylight. 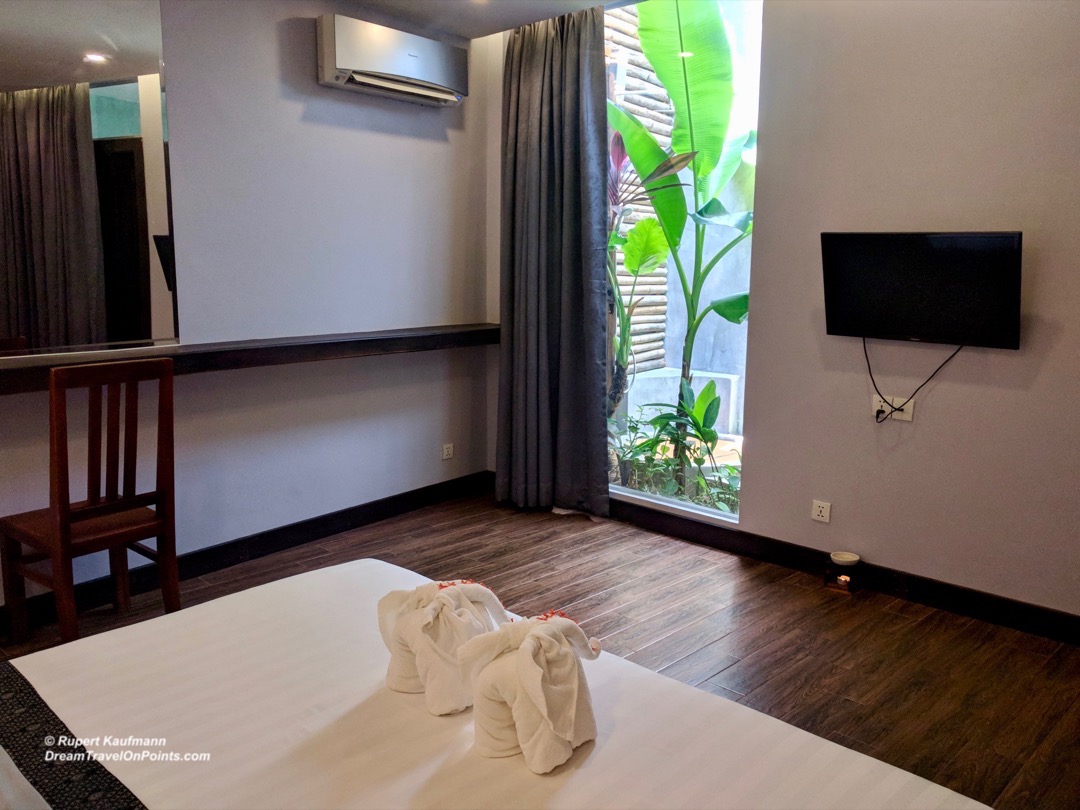 The bathroom itself looks like an outdoor bathroom, with huge green plants all around the shower and sink area, with wood floors leading to the shower. It’s a joy to walk into this sunkissed bathroom in the morning, taking a rainfall shower surrounded by lush greenery! Now, this actually feels like a rainfall shower! 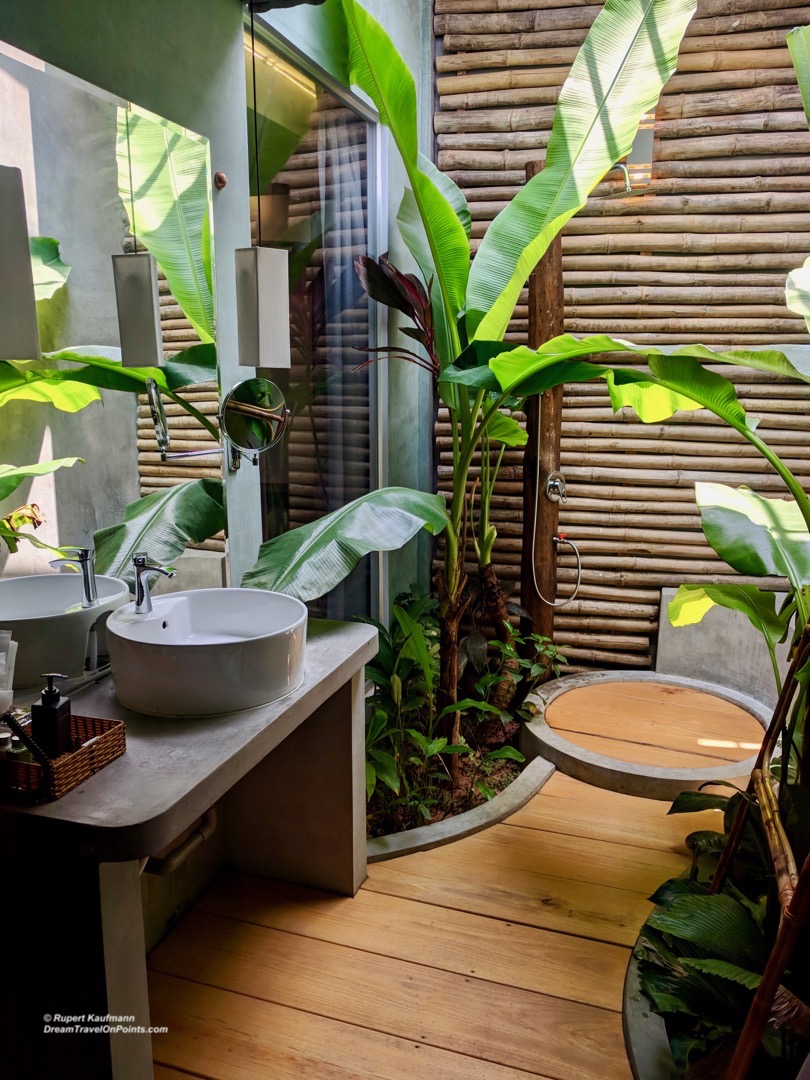 Smartly, there is a curtain in front of the bathroom window – for darkness at night and privacy in the shower. Also located in the bathroom is a large, open closet with a luggage bench and shelf. The room has thick soft towels, a hair dryer and a full set of amenities. 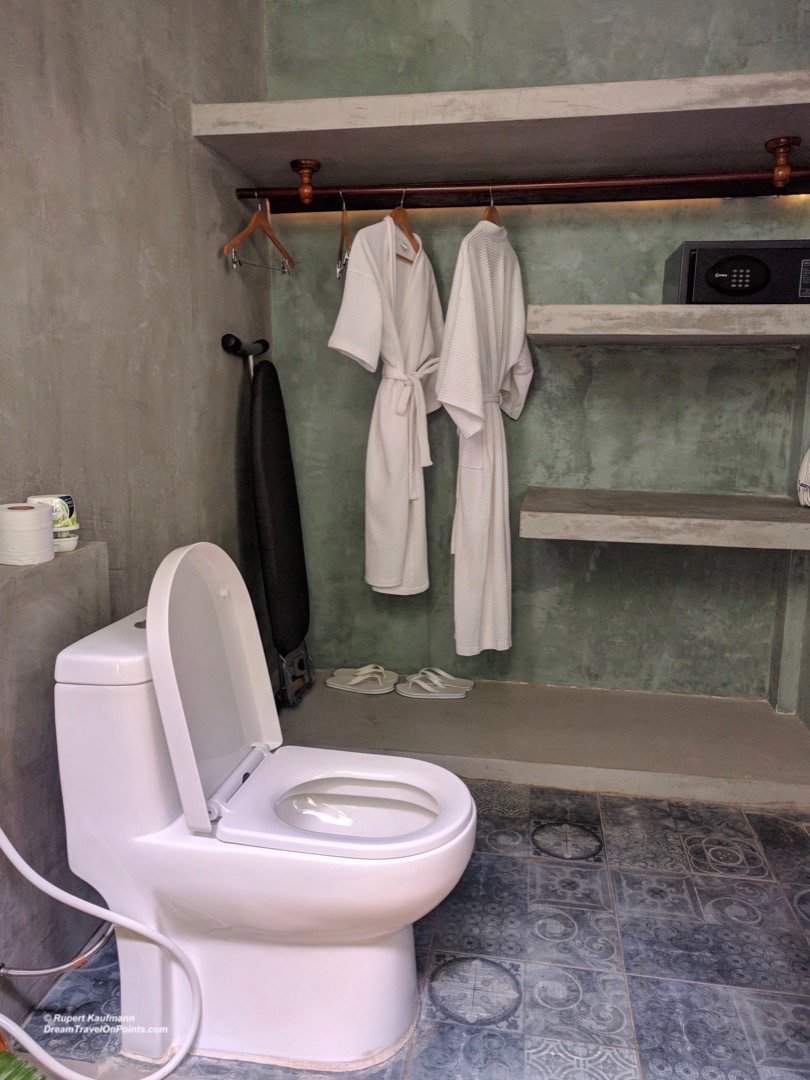 The large bedroom has dark wood floors, a large and comfortable bed with nice sheets and pillows. 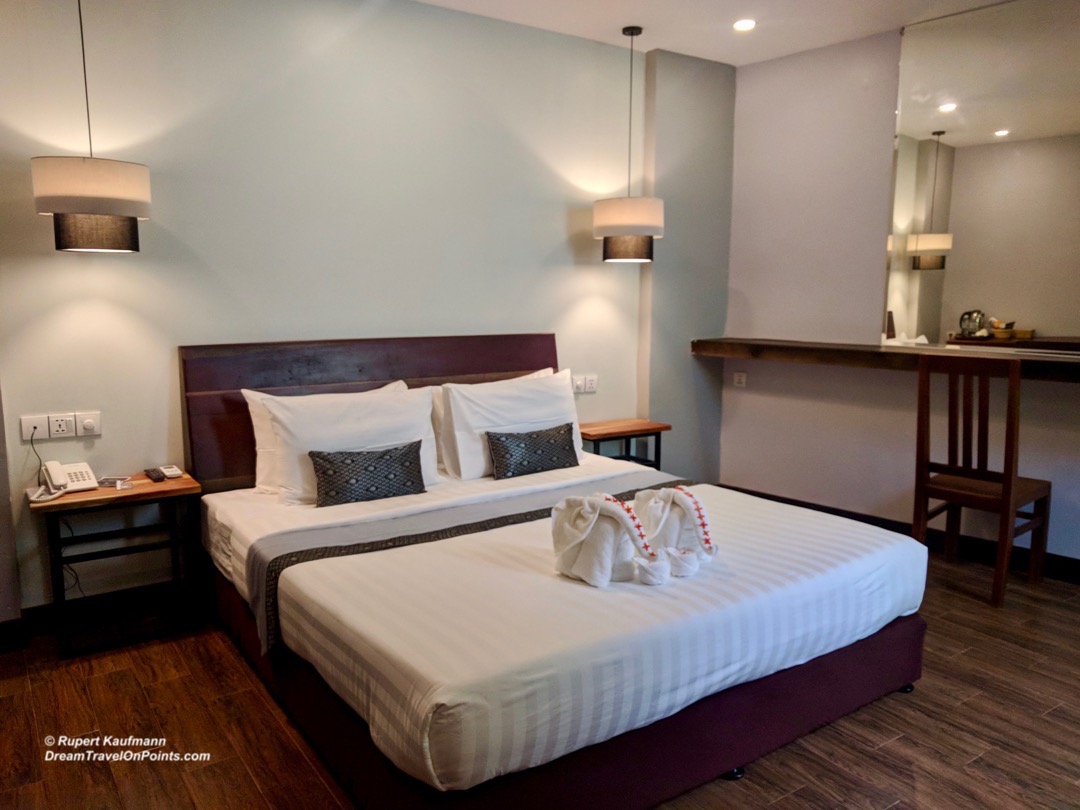 You also have a large desk to the side with coffee/tea facilities. An incense burner in the room greeted me with a wonderful smell on arrival. 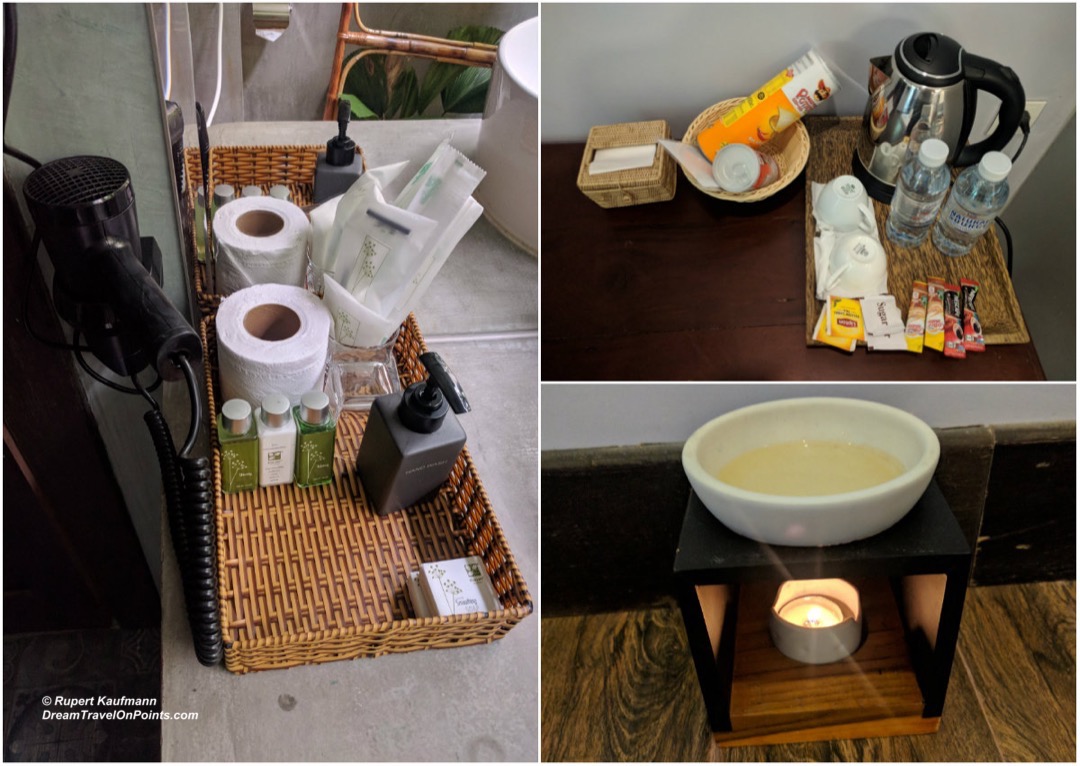 The thoughtfully designed rooms with the fantastic outdoor/indoor bathroom made this one of the nicest rooms I’ve seen in a mid-range hotel and reason enough to recommend the Hotel Five S Kampot.

Restaurant & Amenities: Near the entrance to the hotel, is a small pool, surrounded by greenery. It’s large enough to take a cool dip after a hot day, but you won’t be doing laps here! There are four loungers to relax and that seemed to be enough during my stay and I was able to snatch one when I wanted to relax. 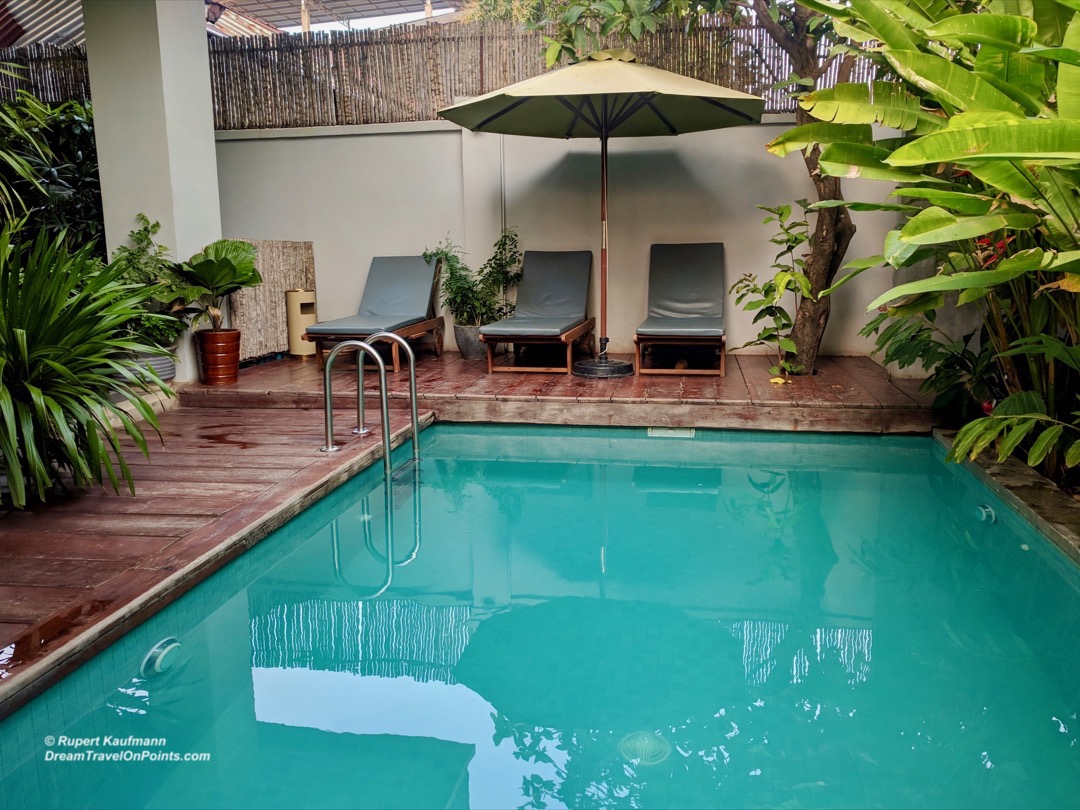 Next to the pool is the restaurant that serves breakfast in the morning. The breakfast is offered a la carte, with a choices of several breakfast sets, including continental, hot and healthy variants. The food is of good quality and the portion large enough for me to be satisfying.
If you want to explore Kampot or the surrounding countryside, you can lend a simple bicycle at no charge. I enjoyed a ride along the river! 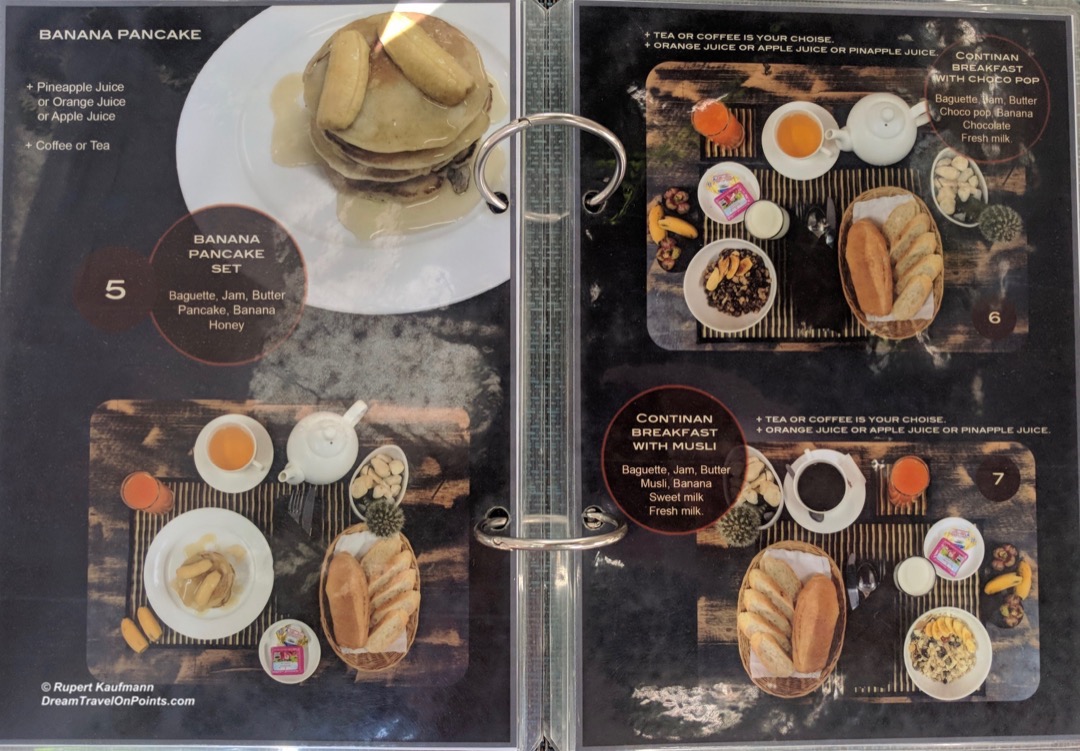 Bottomline: The Hotel Five S Kampot surprises with beautiful rooms and fantastic bathrooms. You get a nice breakfast and friendly service for a very enjoyable stay, I wish I had stayed longer and I wouldn’t hesitate to return. The location slightly outside of downtown is no issue and the free bicycles are a nice touch. At a price of only $56/night including breakfast, the Hotel Five.S is great value and the best choice to explore Kampot and surrounding sights! You can find current prices here!