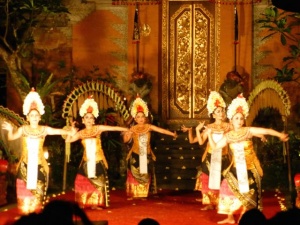 If you are staying in Ubud overnight and have any cultural interests, you should add a dance performance do your evening schedule. It will make for a nice evening out and will provide some insights into Balinese history and culture. There are very different dance forms available, the  “made for tourists” performances vary in quality and there are a number of different venues available, so keep reading before buying tickets from the first person approaching on the streets of Ubud! 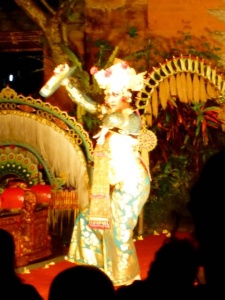 A very unique form of dance and our favorite is Legong dance. It’s performed by female dancers in beautiful dresses to music played by guys on traditional instruments. The girls will move their bodies and arms to the music in stark movements, with complex feet moves, strong, almost exaggerated gestures and facial expressions – statuesque postures are assumed, fingers snap into position and wide open eyes stare at you! It’s an unusual and captivating dance form. Traditionally, Legong dance was an entertainment for royalty, performed by young girls – today, you don’t have to be royalty and the dancers don’t have to be that young, so everybody can enjoy the show! 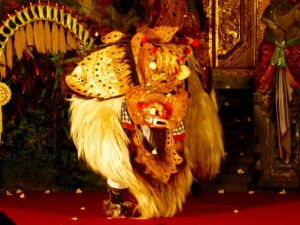 Another balinese form of dance available in Ubud is the Barong dance, a very different kind of performance. It’s a mix of dance and theater, telling the story of the fight of good and evil! The Barong is a mythological figure with the head of a lion, representing good spirits. Two men, one carrying the head and one the dragon-like body and tail, act as the barong. They fight Rangda, the representation of evil, who uses magic in the fight. But, in Ubud just like in Hollywood, the good prevails and restores order to the world! I enjoyed the elaborate costumes and the show –  I do recommend to read up on the story or it will be tough to follow with the different characters entering and leaving the stage, evil and good magic being cast and all…
In somewhat similar performances in a mix of theater and dance, actors in costumes tell Hindu stories to music. The more complex the story, the harder it is to follow, so I’d suggest to read up on the story. You can find more detail about the different dance forms here. 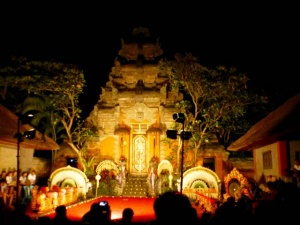 Some of the troops enjoy their artistic freedom and combine the different forms into one show, giving you an introduction in one performance! As with any other art form, Balinese dance requires a lot of skill – so the quality of the performances vary. We went to a show at the Ubud Palace, making for a spectacular backdrop for the show. Make sure to go early – the seating is first come, first serve and the good seats will fill up quickly. The tickets are sold by “authorized agents” on the street – they have badges and the tickets look like a brochure with a little stub that is torn out as the ticket. I was a little worried about buying them, because they didn’t look like a ticket – but we were alright!

Your hotel should be able to provide you with a schedule of the troops and venues (click on the schedule photo for current shows – I found the online versions to be unreliable) – there are a number of performances every night! The prices are IDR80,000 and up (around $6) with some of the better troops (marked on my schedule, based on Lonely Planet review) being higher. I’m usually hesitant to visit cultural performances set up for tourists – in this case it’s an easy and inexpensive introduction to traditional Balinese culture and dance and makes for an entertaining evening – so enjoy!