Euowings started as a regional airline in Germany, was acquired by Lufthansa and transformed into a low-cost carrier. The airline is growing rapidly, adding new hubs, destinations and planes, resulting in head-spinning changes and some bad press from operational challenges. So, who really is Eurowings today, what destinations does Eurowings serve and what planes do they fly? 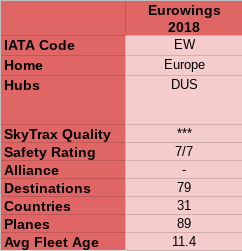 Who are they? Eurowings started in 1993 as a regional airline, flying small turboprop planes from Nuremberg and Dortmund in Germany. Lufthansa acquired a controlling stake in 2005, combining a number of different operations under the company. Starting in 2014, Lufthansa shifted gears and turned Eurowings into a low-cost carrier (LCC) to compete with Ryan Air and easyjet! They merged the ill-fated Germanwings brand into Eurowings and replaced all the small turboprop and regional jets with mainline Airbus A320/319 jets. In 2015 they started operating long-haul flights to the Americas and Asia, starting with a single Airbus A330. That resulted in severe operational issues, as everytime there was a maintenance issue, flights would have long delays, stranding passengers in far-away places for days. After the acquisition of parts of bankrupt airberlin, Eurowings had another growth spurt (with more operational issues).
SkyTrax rates Eurowings as a 3-star airline, similar to other low-cost carriers.
AirlineRatings gives Eurowings a perfect 7-out-of-7 star rating for airline safety, better than Ryan Air or WizzAir. While technically Eurowings had no fatalities in 10 years to achieve that rating, its (now) subsidiary Germanwings had a tragic crash in 2015.

Eurowings Destinations: Eurowings serves 79 destinations in 31 countries. It has established multiple mini-hubs or focus cities across Germany, including Dusseldorf, Cologne, Berlin and Hamburg. They have previously not served Frankfurt and Munich, to avoid in-house competition with Lufthansa, but have recently announced flights there, too. They also have a hub in Vienna, Austria, the home of Austrian Airlines, another Lufthansa subsidiary. From these hubs they serve mainly popular tourist destinations in Europe, North America and the Carribbean, as well as flights to Namibia and Bangkok, Thailand. Many of these destinations are seasonal or involve as little as one flight a week, following more of a charter model than a full-service carrier. 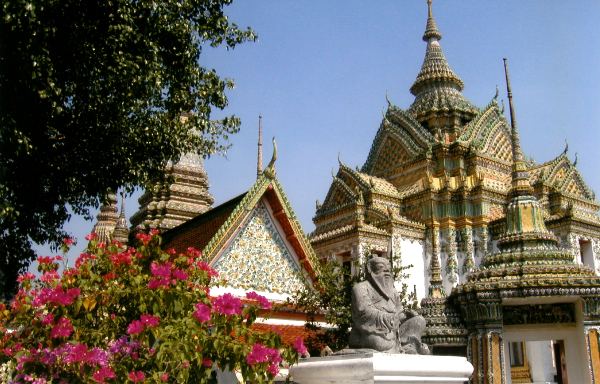 Eurowings Fleet: Eurowings operates a fleet of 82 Airbus A320/319 single-aisle planes for short-haul routes around Europe. The long-haul destinations in the Americas, Africa or Asia are served by  7 A330 wide-body planes. The average age of all planes is 11.4 years.That’s pretty high for an LCC, compared to Ryan Air (6.8) or WizzAir (4.8) and due to the take-over of older Lufthansa or airberlin planes. 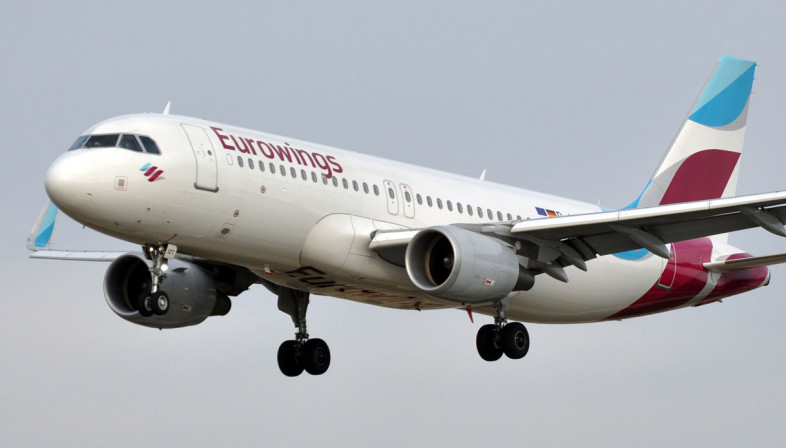 In a break from the low-cost operating model, the planes are outfitted with a “Best” cabin that has Premium Economy style seats on long-haul flights and Biz with  European-style Business Class on the A320/319 with standard Economy seats and the middle seat kept empty and Lufthansa’s old lie-flat seats on the A330, making it more of a hybrid airline than a true low-cost carrier. 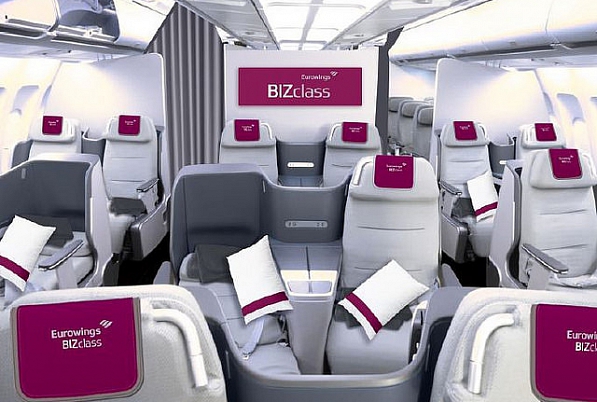