Malaysia Airlines (MH) is the flag carrier of Malaysia (read my overview here). Between the competition of AirAsia locally and Singapore Airlines, Garuda and Thai Airways, Malaysia Airlines has been struggling. The two fatal crashes in 2014 made things worse, leading into bankruptcy in 2015. I had booked multiple tickets on Malaysia Airlines despite the crashes (read my thoughts here), but before the bankruptcy. My experience was a reflection of the tough times Malaysia Airlines is in…

Pre-Departure: My experience until departure was so bad that it justifies a (lengthy) post on its own. In flying millions of miles on most major carriers around the world and some pretty much unknown ones, I have experienced some good and bad customer service. The experience with MH customer service was by far the worst to date and not something I’d want to repeat or wish on anybody. I had hopes that I’d experience some of the well reviewed Malaysia Airlines onboard service, but it continued to be very mixed…
First off, MH is generous with the baggage allowance, giving you two pieces of check-in luggage weighing up to 30kg, plus an additional 15kg for OneWorld Sapphire members. You also are allowed a 7kg carry-on, which is not much given many people travel with electronics and gadgets already weighing that much…
The online check-in is buggy, requiring many steps and multiple attempts to get boarding passes. I was not able to re-enter my OneWorld member (that was lost in a previous ticket change).
At the airport, there was a separate Business Class counter (available to OW Sapphire) and we didn’t have to wait long. Unfortunately, it went downhill from there. The agent (and his supervisor) were not able to enter the OneWorld number (!) and refused to provide the OneWorld lounge privileges despite having the card in front of them. We were able to use the Pagstop lounge (review here) and Miascor lounge (review here) with my PriorityPass membership instead. I found out later that the agent had entered the wrong airline code, resulting in the system not recognizing the status. I had it fixed by a different agent later. The boarding process was organized and quick, with no further issues. 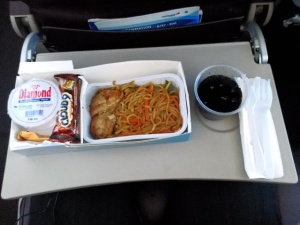 Service: We were welcomed on board by the crew in the traditional dresses, which (similar to Thai or Singapore Airlines) makes for a special experience compared to the modern, boring uniforms of most airlines these days.
On our first flight, the attendants did the bare minimum, professional but without any smile. After having a cup of coke with my meal, I was denied a coffee afterwards, the attendant pointing to the seat belt sign – curious, as the pilot had given the “all clear” to the crew to get up and continue service! The crew disappeared for the remainder of the flight into the aft galley for a chat. They didn’t find the time to check on the bathrooms (like most other Asian airlines) – it was in a disgusting state and could have used their attention!
The meal service on our early morning flight consisted of a choice of chicken with noodles or fish with rice, with a cup of water and a chocolate bar. Most airlines in Asia offer a choice of local and international dishes, so I was unpleasantly surprised to find two local dishes for breakfast!
The service on our second flight was significantly better – they were professional and friendly and making a sincere effort to ensure everybody on board had a pleasant flight. Service was provided with a smile and requests (from us and people around us) were swiftly addressed. The attendants continued to walk through the cabin and offer water or additional drinks as people asked for them. The second flight was during dinner time, yet curiously offered a “snack” consisting of a sandwich or wrap. It was small and comparable in quality what you will find on a US domestic flight or a low-cost carrier, not competitive with meals offered on Singapore or Thai Airways. 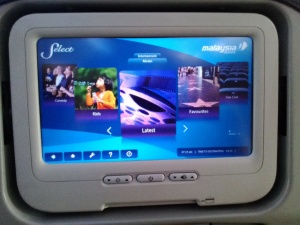 The highlight of both flights was the excellent entertainment system. It is available as soon as you are onboard (the first crew didn’t bring headsets till late in the flight; the second crew had already distributed them at time of boarding). There is a large selection of international movies for guests from all around the world giving you plenty of choices. It included a good number of recent, global blockbusters. The 9in screens are clear and can be adjusted for viewing, controlled via touch screen or the hand-held controller. There are also audio and TV programming as well as games and travel information. Overall, this is a very competitive offering with other airlines. 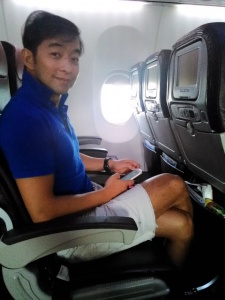 Hardproduct Boeing B737: Malaysia Airlines is flying a large number of B737-800 on regional routes across Asia – competing with the wide-body offerings of the other Asian network carriers. The business class has only recliner seats (which is one reason we didn’t bid to upgrade (read here). The economy class has a standard 3-3 layout with a seat pitch of only 30 inches – that’s much tighter than most airlines use for international flights and more in line with the regional low-cost carriers like AirAsia. At the price premium Malaysia Airlines is charging over AirAsia on regional routes that is not really an acceptable offering and not very comfortable when you are as tall as I am at 6ft3! The seats are covered in leather and have a small recline. There is no power outlet or USB port available, so make sure your gadgets are charged before departure!

Conclusion: The experience of Malaysia Airlines economy class was disappointing. After the poor call center and ground service, the onboard service did little to improve the picture. While the second flight offered a glimpse of what MH used to be (and can be), the rest of the experience was poor. While I can understand the impact of the bankruptcy and reorganization at a personal level, it’s not really acceptable at the business level. Add to that the below-average hard product and there is little reason to choose Malaysia Airlines: If you are looking for the best price, go with AirAsia – you get better service and are only missing out on MH’s excellent entertainment system. Or, fly one of the excellent full-service providers in the region, like Thai Airways or Singapore Airlines. If you are connecting from another OneWorld carrier and want to stay within the alliance, I’d recommend Cathay Pacific, all are offering much better and more consistent service than Malaysia Airlines. Let’s hope that the new CEO, Christoph Mueller, can turn things around at MH – he has a lot of work on his hands!