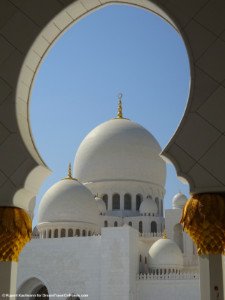 Abu Dhabi in the United Arab Emirates is a fascinating city. It has developed from a few huts in the sand to a gleaming mega-city with a skyline of high-rise buildings along the shore, opulent hotels and malls, over-the-top entertainment and a growing number of historic and cultural sights, making it a great destination for a stop-over when flying Emirates or Etihad around the world!
Why you should go: Few cities have gone from rags to riches as quickly as Abu Dhabi has. It was a small town in the desert just a generation ago, but it has used its oil-wealth to build a modern city, with hotels, malls and entertainment venues. Abu Dhabi has also invested into telling its history with nice museums and exhibits and it’s shaping the future with the recent opening of the Louvre Abu Dhabi!
But the best reasons are the highly ranked airlines with a home in the UAE, Emirates (Dubai) and Etihad (Abu Dhabi), making Abu Dhabi a convenient stop-over on an international trip. I love stop-overs: even if a city might not be high enough on my list to justify a longer trip, I can always add a short visit to a longer journey – and I suggest you consider it, too!

When to go: Abu Dhabi is warm all year, but gets excruciatingly hot in summer, with temperatures above 40 degrees Celcius (above 100F). Despite a little rain, the winter months from December to February have more pleasant weather. The shoulder season – March-May or October-November, might offer lower rates!

Where to stay: Abu Dhabi is spread out and feels like Los Angeles with wide streets cutting through the city. It’s not a walking city and you’ll need car transportation to get around, making it somewhat less important where you stay. I recommend to stay near the Corniche Beach or downtown, putting you a short way from many of the sights, shops and restaurants in the city. If you are on a return trip, looking for entertainment and amusement parks, consider Yas Island, with Ferrari World and other attractions. On my first trip to Abu Dhabi, I stayed at the Novotel Abu Dhabi Gate, which is half-way between the airport and the beach, making everything accessible, but nothing really convenient.
Here are a few well reviewed hotels to consider:

Top things to do: The single most impressive sight for me is the Sheikh Zayed Grand Mosque. The mosque is the largest in the UAE and was built between 1996 and 2007, initiated by the late President of the UAE. The massive white structure with its domes and minarettes is gleaming in the sun from afar. It can hold up to 40,000 worshipers at a time. 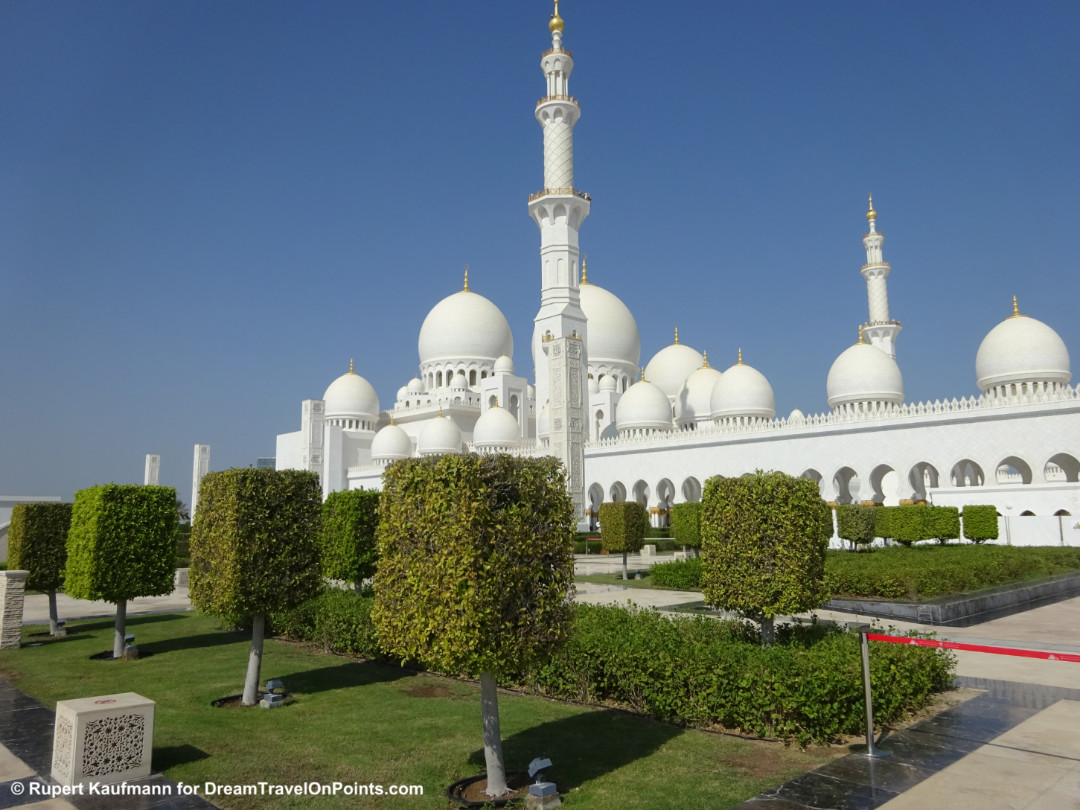 The Moorish inspired gateways, intricate mosaics and humongous chandeliers with millions of Swarowski crystals make for an overwhelming sight! The tours are light-hearted and very informative, making it a must-do on a visit! 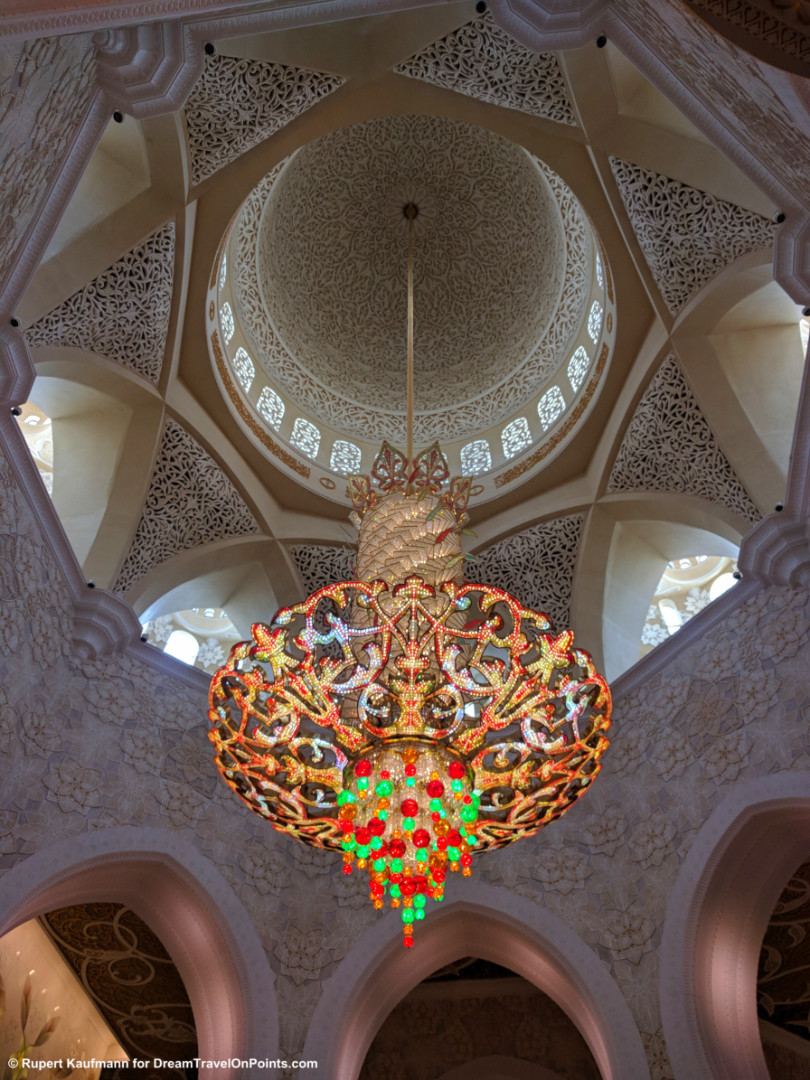 Qasr al Hosn is a fort and palace from the 18th century and a historical landmark. It’s currently undergoing a massive restoration effort, but the small museum next door does an excellent job of telling the story of Abu Dhabi. A series of photographs shows the rapid evolution of the city from a small village of huts to the modern mega-city of today.

A stop popular with tour buses is the Emirates Heritage Village which showcases the housing and life of the original inhabitants, but is a little underwhelming and feels artificial, more like a local Disneyland. 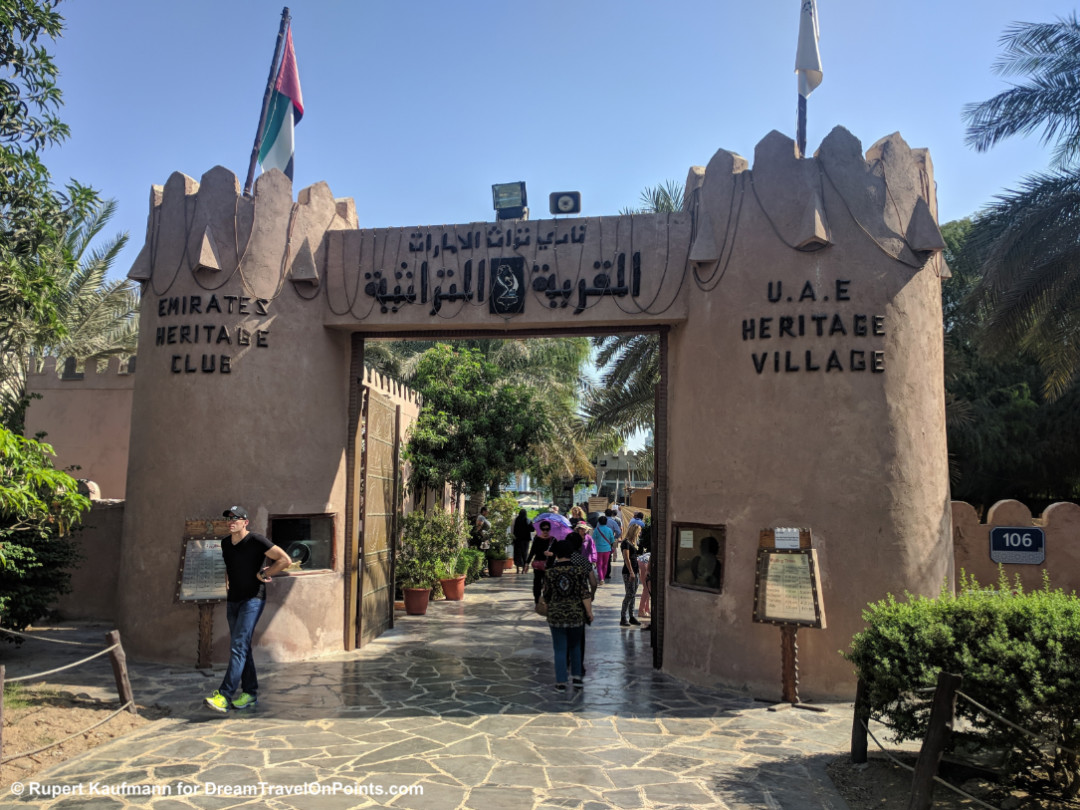 The Abu Dhabi Louvre was built in cooperation with the French Government and is a art and civilization museum. The grand architecture alone would justify a visit, before even getting to the exhibit!
If all of that is exhausting, the probably most popular attraction is the Corniche, a long stretch of beach along the warm gulf. The beach is separated for families, couples and singles and offers full facilities for a fee. It caters to local sensitivities, while seeming a little odd to Western visitors.

And if you are coming for some family entertainment, you should add Yas Island to your itinerary with its Ferrari World, Warner Bros World, water park and massive mall.

How to get around: Abu Dhabi reminded me of Los Angeles, or even better Phoenix, Arizona. It’s a car city, so the best way to get around is by taxi. I found drivers to be honest and friendly and had no issues during my trip. While there are buses, they weren’t really convenient to get where I wanted to go. 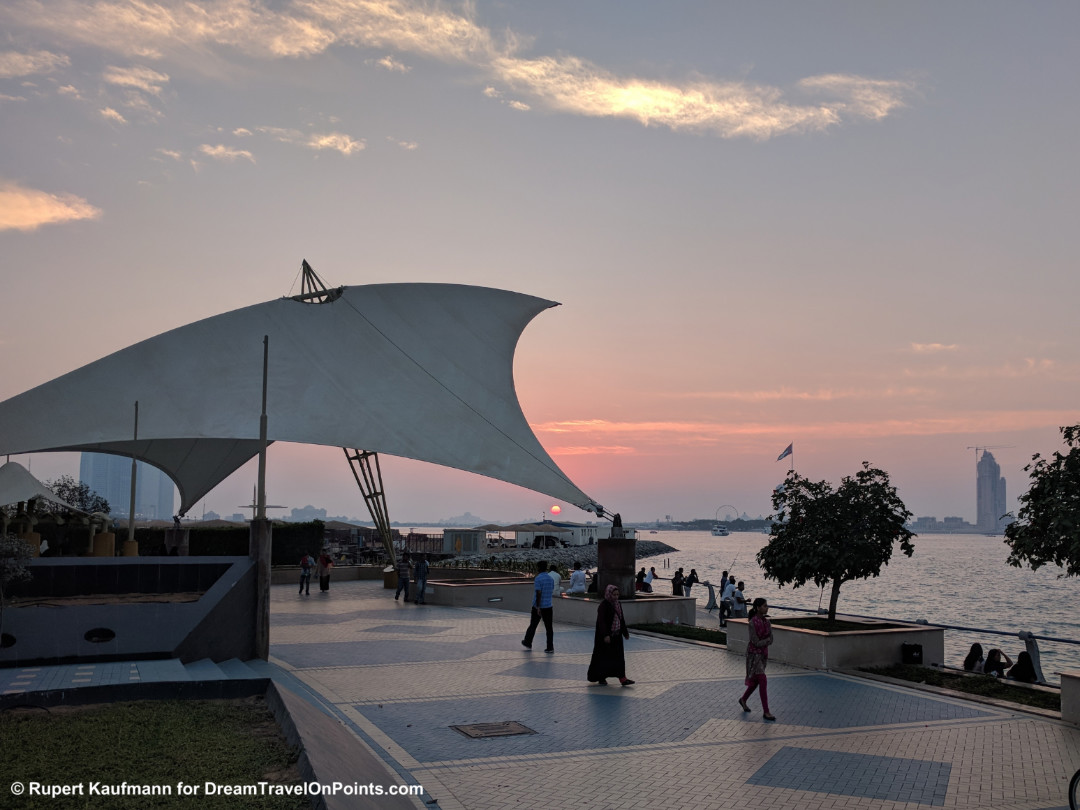 Things to consider: While on the face, Abu Dhabi is a modern city, the United Arab Emirates are a predominantly muslim country with strict and conservative rules according to their faith. The consumption of alcohol is not allowed for muslims and a permit is required to consume alcohol, which is only available to residents. While the police might look the other way, it is illegal to drink alcohol for foreigners without a permit. Hotels are allowed to serve alcohol, don’t request to see a permit and a drink at the restaurant before heading to your room in unlikely to get you into trouble. But people who got drunk in town and were noticed, even if for other things, have been convicted on alcohol charges!
Any type of sexual relations outside a heterosexual marriage are illegal and face severe punishment. Homosexuality is punishable by death. If you are LGBT or an unmarried couple, I’d advise to consider these laws before visiting and to be cautious if you do decide to visit. Many people have visited the UAE without issues – but a few were punished severely based on these laws, so it’s worth considering.

I do receive a small fee, if you decide to book through the link, at no cost to you – thank you for supporting my blog!