Norwegian Air is a European discount carrier how started flying across the North Atlantic, bringing fares as low as $149 one-way and an intense fare war with the legacy carriers on those routes! Flights between the US and Europe have never been this cheap – and they are about to get even cheaper! Norwegian Air has been approved for flights from Ireland to the US and is promoting introductory fares of $69 oneway to celebrate the occasion!

Norwegian Air has been flying their Boeing B787 Dreamliners from Scandinavia to the USA for a while and I have reported previous sales starting at $149 oneway on this blog before. Now, the US Department of Transportation (DOT), has approved Norwegian Air’s Ireland subsidiary for flights to the US. While US airlines were lobbying to deny the application, the US didn’t have much choice under existing treaties between the US and Europe. 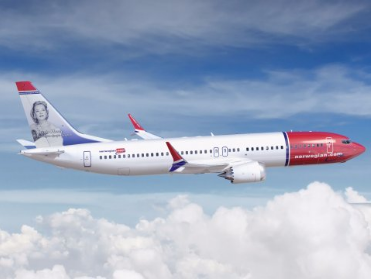 Norwegian Air will be able to use their new long-range Boeing B737Max on routes from Ireland to the East Coast of the US, making the super-low $69 fares possible. The new B737 has more fuel efficient engines and wing tips, consuming 20% less fuel and making the transatlantic flights possible. Norwegian is scheduled to receive their planes in Q1/2017 to launch service.
Another contributor to the low cost model are the choice of secondary airports with lower landing fees and operational costs. So, don’t expect the flights to “Greater New York” to land at JFK or La Guardia, they are more likely to head to a small airport outside of town, like Steward International in Newburgh, 60 miles from Manhattan!
And keep in mind that Norwegian, just like other low-cost carriers (and a growing number of legacy carriers) charge for luggage, seat assignments and other extras, so make sure to look at the total cost – or that “cheap” flight can become bad value! You can book tickets directly with Norwegian Air!
But even with these limitations, I welcome the arrival of Norwegian on these routes. Even if Cork, Ireland to Newburgh, New York, is not on your or my travel plan, it will drive down the fares across the North Atlantic – isn’t competition a beautiful thing?