We recently traveled on a Thalys high-speed train from Cologne to Paris. While I love high-speed trains for the speed and downtown-to-downtown convenience, I never gave a lot of thought to the customer service of the – often – government or previously government owned operators. So what Thalys did after the trip, really surprised me in the most positive way!

I prefer train travel in Europe for anything under 4-5h, as it is so much more relaxing than a flight: You don’t have to make your way out of town to the airport, deal with check-in and security, waiting in the airport, possibly immigration and waiting for your luggage on arrival, before heading back into town, all to catch a 1h flight. You get to relax in comfortable seats with food at your seat or in a dining car, have often access to wifi and phone, all while enjoying the countryside around you…

Our train ride from Cologne to Paris was not much different – short trip to the train station, short wait, easy boarding and pleasant ride onboard the train. Unfortunately, our train got stuck outside Paris Gare du’ Nord station due to infrastructure issues, causing a delay of almost an hour. While we were not happy, we were on vacation in Paris, and decided to enjoy our arrival with a glass of champagne, rather than getting upset about the delay.

I had signed up for the Thalys frequent traveler program (as I do for any airline/hotel company when using them the first time) and had booked my trip through it. To my utter suprise, a few days after a trip, I got the following email from Thalys: 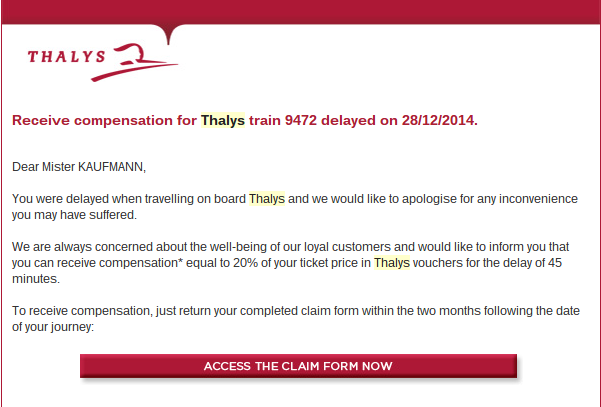 While European Union regulation requires refunds of 25% for delays of 1-2h, this was less than 1 hour and did not require a refund. But instead of just shrugging of the delay as standard operating procedure, like most airlines do. Or throwing some points at you, if you are a top-level elite frequent flyer complaining about it… Here is a transportation company who is actively following up on an issue and offering compensation before you even had a chance to complain about it!

I followed the link, expecting to be asked for all kinds of information like for missing points/miles requests, that I have to track down in old reservations and confirmation emails, but there came the second surprise: After signing in with my Thalys card information, all the relevant information was already filled in and all I had to do was click submit! Not only do they intend to provide great service, they have invested in the IT systems to actually pull it off, rather than leave you in the ditch, like the ancient systems United or IHG appear to employ!

A few days later, I received the electronic voucher as well as 100 points in their loyalty program (the ticket earned me only 46, so that’s a nice treat).  Hats off to Thalys for customer service well done. I’m sure to hold this up to airlines in the future as an example of how its done! And Thalys has won a loyal customer today!