Copa Airlines is the flag carrier of Panama and has a long and mixed history. If you are planning in or through Latin America, you are likely to run into them, as they offer lots of flights throughout the region. And if you have seen their planes at the airport, they may look vaguely familiar – read on to find out who they are and what to expect! 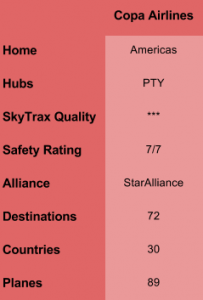 Who are they? Copa Airlines (CM) is the flag carrier of Panama, based in the capital Panama City with their hub at Tocumen International Airport (PTY). They are no longer flying domestically, but serve a total of 72 destinations across North, Central and South America, as well as the Caribbean. They operate a fleet of currently 89 jets, a mix of Boeing B737 and Embraer E190. Given the strategic location of Panama, they are able to serve all of the Americas with narrow body planes.
Copa Airlines is a full-service carrier and offers a Business Class on all of their planes, as well as Economy Class.
SkyTrax rates Copa a 3-star airline, on the same level as the big three US carriers.
AirlineRatings gives them a 7 out of 7 rating, the maximum rating in line with other major airlines. There was only one fatal accident more than 20 years ago.

Why should I care? Copa’s strategic hub location in Panama allows them to connect most of their destinations with only one step. This is especially interesting when traveling from the US to South America or secondary airports in Central or South America, where they can save you several hours over flying one of the US carriers.
The reason those planes might look familiar is that Copa was majority owned by Continental Airlines from 1999-2005. In that time, they closely aligned their product, with a livery similar to Continental Airlines, similar cabins and seats as well as the same frequent flyer program.
After Copa regained its independence, the livery stayed and product stayed the same, and Copa is still part of StarAlliance, but Copa now has it’s own reward program, ConnectMiles. Similar to the US carriers, they have their own airport lounges, Copa Club.

What else should I know? Copa Airlines has acquired the Columbian airline AeroRepublica, and integrated as Copa Columbia. They are continuing to expand by adding destinations across the region and has more B737 planes on order.
Copa Airlines is a member of StarAlliance, the largest airline alliance in the world, giving you connections to flights around the world as well as the opportunity to earn and redeem miles on thousands of flights. In the program you still earn based on distance flown, different from the US carriers where you earn based on money spent! That means, you could potentially earn more miles than on US partner United Airlines, giving you an alternative!