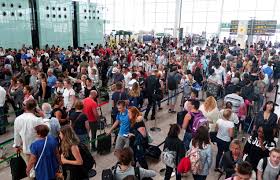 It seems like at least once a year there are news from Europe about strikes crippling air transportation on the old continent – Air France, Alitalia and Lufthansa all had their share of problems, causing flight cancellations and delays, inconveniencing travelers. This year, the (private) security workers at Barcelona’s International Airport have been staging work-stoppages to improve their negotiating position in a fight over salaries. Those negotiations appear to have failed, resulting in a full-on strike at the airport, resulting in long lines!

The private security workers are complaining about low salaries (starting at EUR800) and being overworked due to staffing shortages. The package offered by the company has been rejected by the Union, resulting in a 24h strike. The Union is threatening to expand the strike to other airports in the region.
In many European Countries, security and emergency services are considered “essential” for public order and safety, and are not allowed to go on strike. The government is planning to send in the police to maintain order and safety and is appealing to the courts to stop the strikes.

In the meantime, travelers are facing chaos and long lines at the airport of 3 hours or more. More than 1,000 passengers have already missed their flights, triggering many to go to the airport 5-6 hours before their scheduled departure to ensure they can get to their flight on time.
I’d recommend to try to reschedule your flight to another day or airport if possible – this type of chaos can ruin any trip. If you can’t reschedule, follow the local news and airport updates regarding the status. You’ll have to brave the crowds and arrive 5-6h early to try to get through it on time until this is resolved!