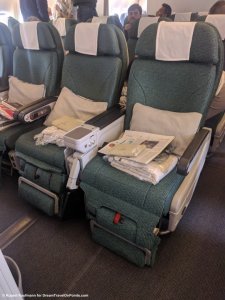 Pre-Departure: Cathay Pacific allows up to a total of 35kg (2 pieces) of checked luggage in Premium Econmy Class, with Marco Polo and OneWorld elite members getting up to 20kg extra. On flights to/from the US it’s 2 pieces of up to 25kg each for everybody. You also get 1 carry-on of up to 7kg and a personal item. That’s more than enough luggage for me and splits the difference between Economy and Business.
At Manila’s airport there was no clear signage for Premium Economy check-in, probably because CX doesn’t offer that cabin class from Manila, so I used the Business Class check-in without issues and the wait was short. There is no lounge access for Premium Economy passengers.
The Boarding Experience in Manila was ok, but Hong Kong was complete chaos. Staff was providing conflicting directions, lines were all over the place – it was a mess that would embarrass even a low-cost carrier! On a better day, Premium Economy passengers should be allowed to board after Business Class and before Economy, aligned with the various elite membership levels.

Onboard Service: Service on my flight from Hong Kong to San Francisco was a complete disappointment, bad enough to not fly Cathay Pacific anytime soon!
Staff greeted passengers at the door, but no service was available after that for Premium Economy passengers – the promised welcome glass of champagne never materialized! Our flight left Hong Kong in the early afternoon with a scheduled arrival in San Francisco in the morning, making this a perfect schedule to maximize sleep. Yet, the terrible service pacing ruined any chance at sleep for economy and premium economy passengers. Different from any other airline I’ve flown on transpacific routes, Cathay Pacific started with a lunch service soon after departure. About mid-flight they decided to serve dinner. They were so loud about it that sleep was impossible and everybody was awaken, whether you wanted the meal or not. I was unable to go back to sleep after this, making this the most miserable long-haul flight I’ve had in a long time. And Cathay Pacific knows better – they did not serve a mid-flight meal in Business Class and instead, like any other airline, served breakfast before arrival. It’s incomprehensible to me, why they chose this service schedule.
There was no noticeable difference in service from Economy class. Staff was professional, but not very friendly or attentive, focused on dishing out the meals as quickly as possible. It was difficult to get their attention outside regular meal services. 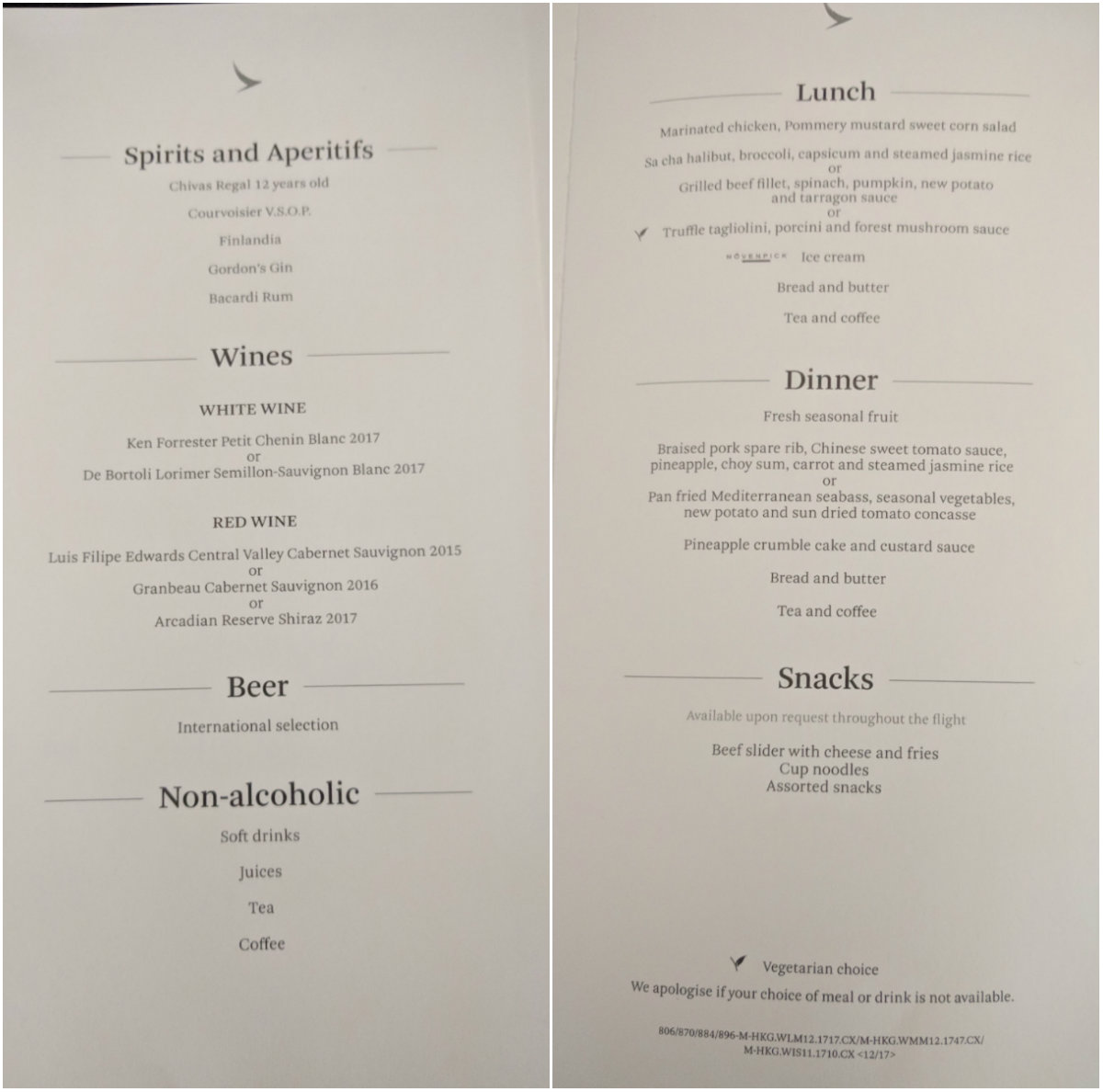 Food: Prior to lunch a menu was distributed, offering a choice of fish, beef or vegeterian main course. I picked the beef and lunch was served on a single tray with a small salad and some bread to go with the main dish in an aluminum tray. The portion was small and the taste mediocre. 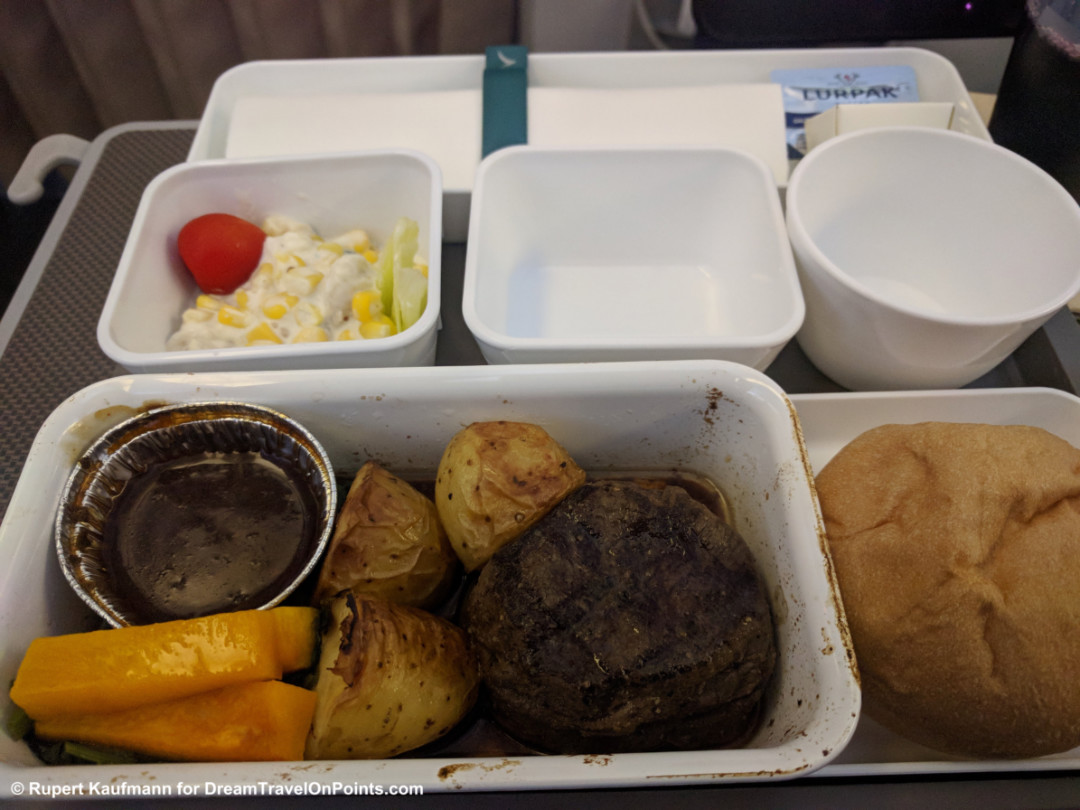 A deep-frozen Moevenpick ice cream was served after the meal – it was good after it had melted a while. 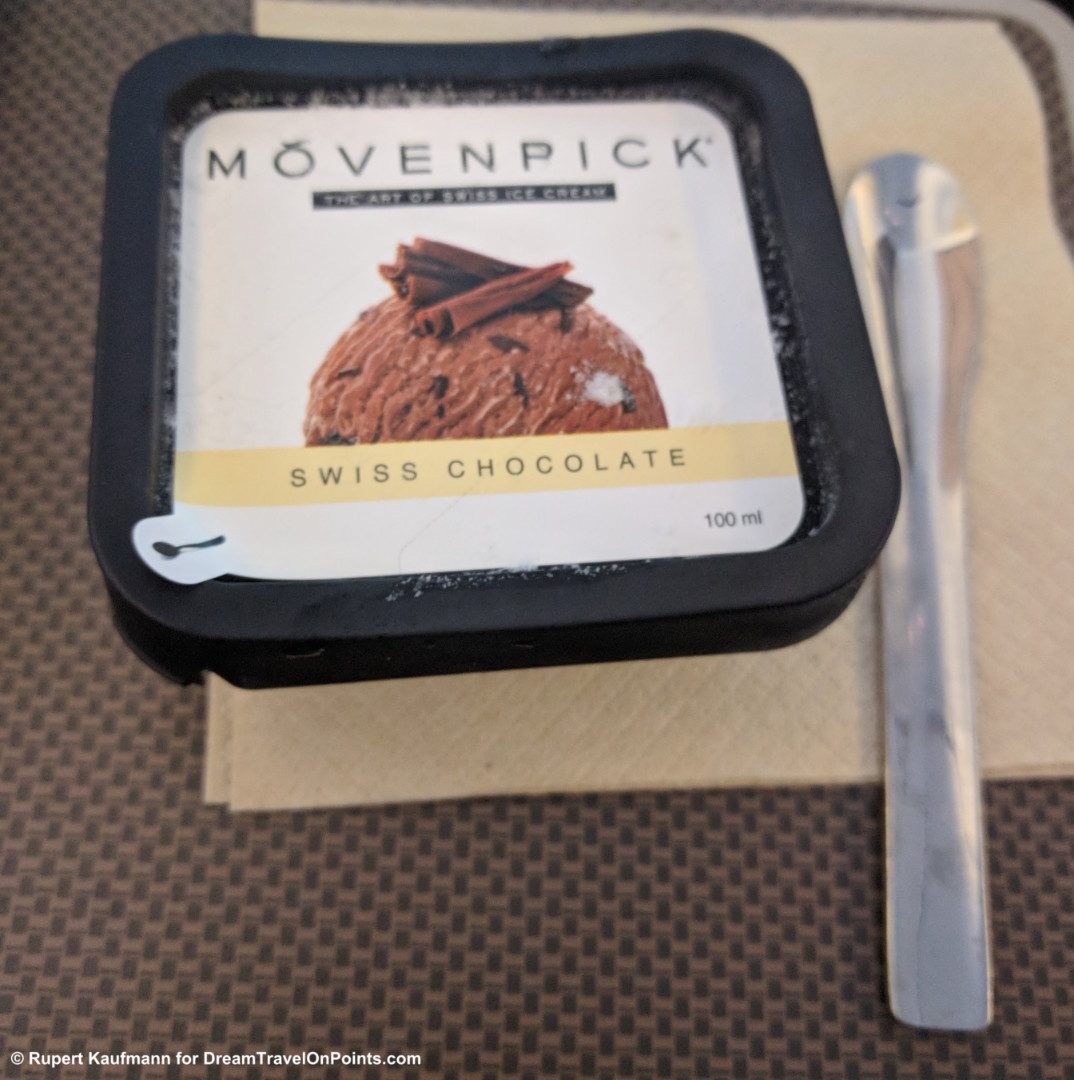 The choice for dinner served a few hours later was limited to an Asian pork dish and a fish dish, with no vegeterian option. It was served on a tray with fruit, a cake and bread. The taste was just as mediocre as the lunch. 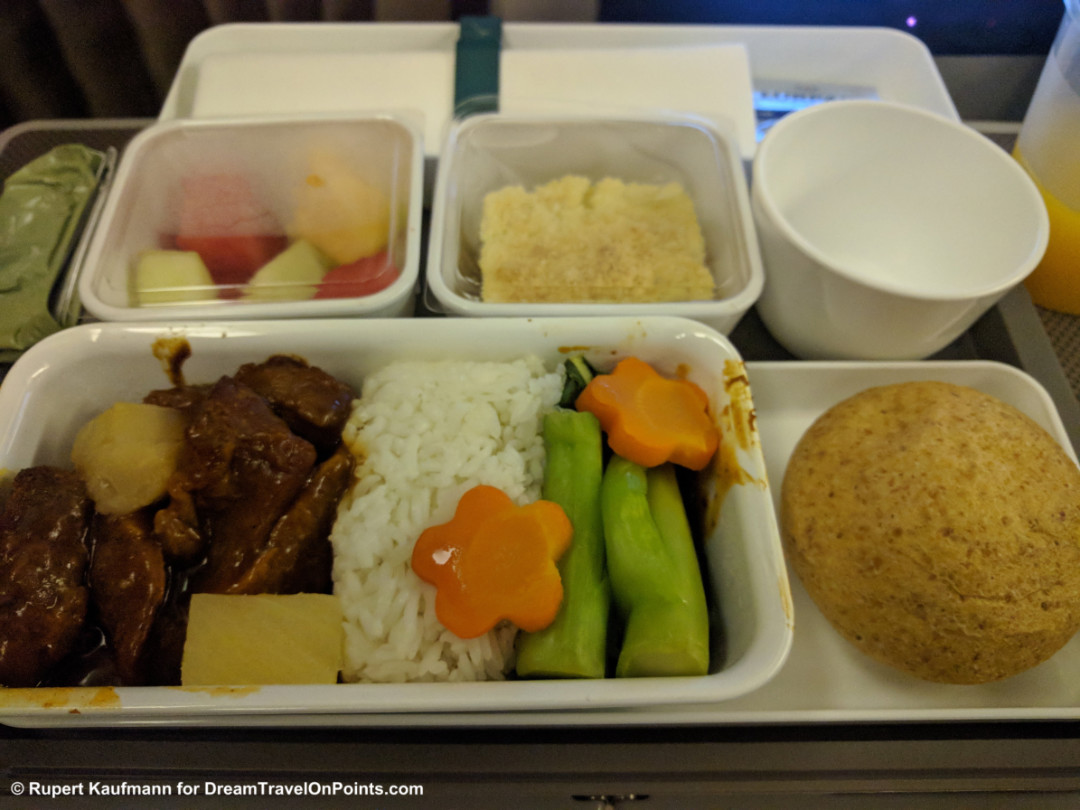 With each meal there was a serving of soft drinks, wine or beer, but refills were hard to come by, so you better pace your consumption! My red wine was decent, but served in a plastic cup – not what I’d expect in Premium Economy! 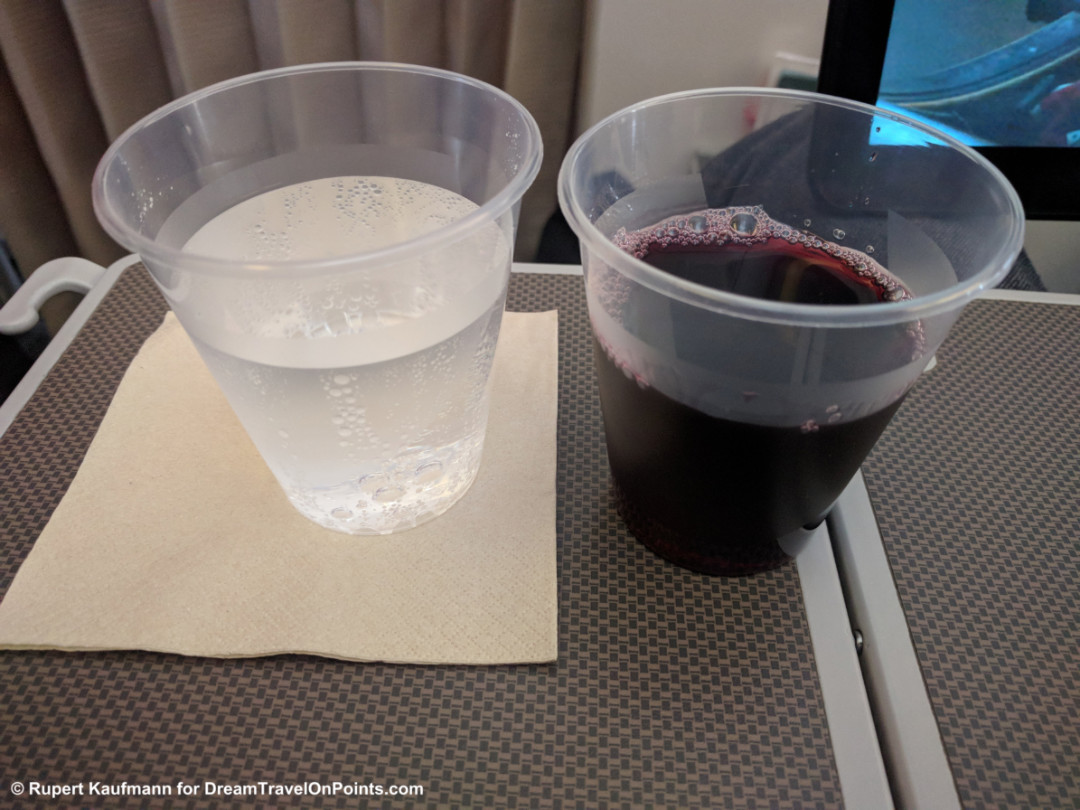 Just as incomprehensible as the mid-flight dinner was the offering of a pre-arrival snack – it was a burger, making Cathay Pacific the first airline I’ve been on to serve a burger for breakfast at 6am! And it was the saddest example of a burger I’ve had in a long time with a squishy bun, an overcooked, hard meat paddy and soggy fries. 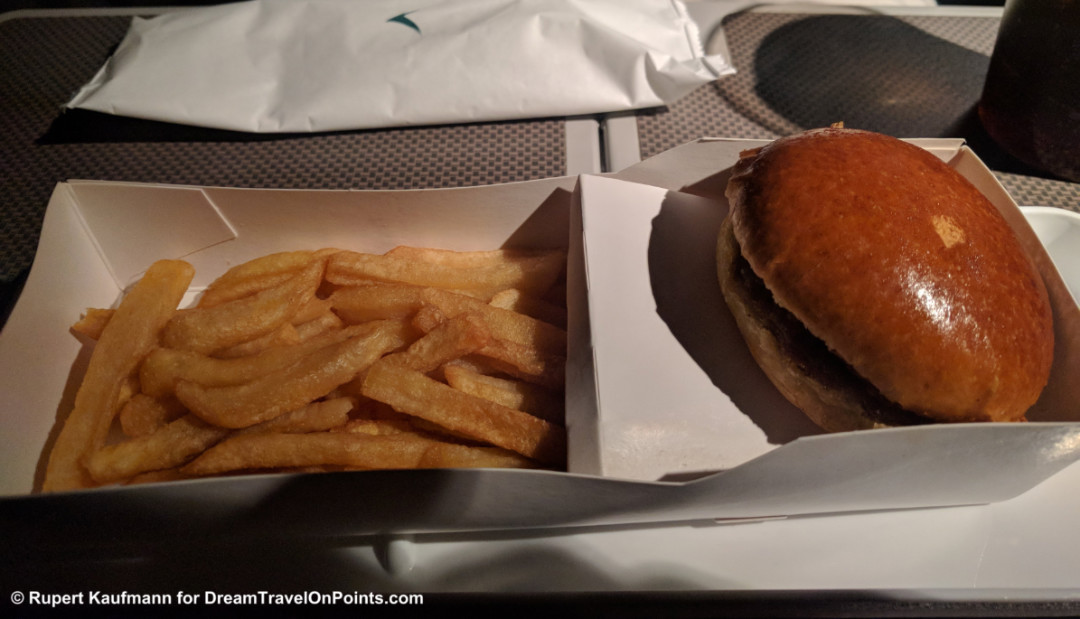 Between the terrible service pacing and the poor quality, the food was a great disappointment. I had expected it to be a step up from economy, somewhat resembling a business class service, but it was far from it. I’ve had better food in Economy on Singapore Airlines or Thai Airways than this.

Seat Boeing B777-300ER (4-class): The Premium Economy Class is located behind the Business Class cabin and has a 2-4-2 layout, one seat less per row than Economy. I had picked a bulkhead row seat, providing me with extra legroom and a legrest extending from the seat. The seat is 19.5in wide, an inch more than Economy, has a 38in pitch and decent 8in recline. There is an adjustable head rest and the leg rest has a fold-out foot rest, but it is way to short for somebody of my height (1.89/6ft3). While the seat does offer more space than a regular economy class seat, the increase in comfort is minimal compared to a bulkhead or exit row seat in Economy. Between the limited recline and terrible service pacing, I didn’t get any more sleep than on a low-cost carrier in an exit row! 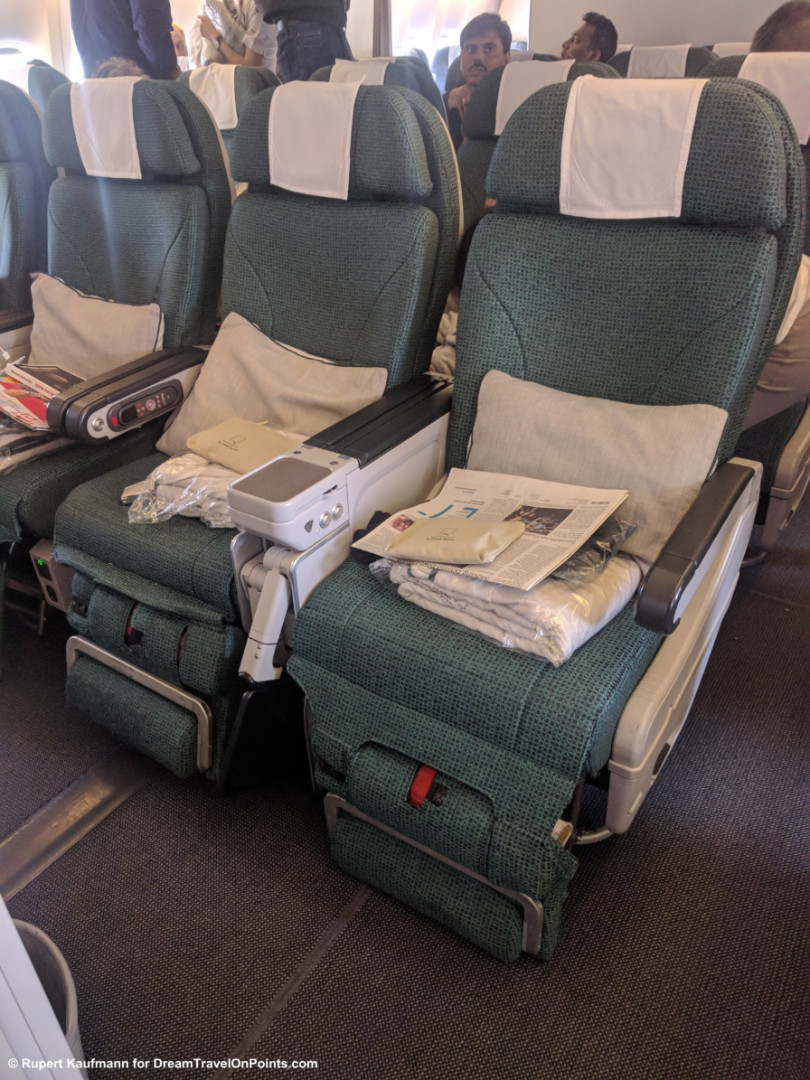 The seat controls are simple enough and located in the side of the seat. The remote for the entertainment system is also in the side of your armrest, an undesirable location as you are likely to push buttons accidentally.

The 10.6in video screen unfolds from the armrest and is crisp and clear, making for a good movie experience. The provided on-ear headset was basic but offered good sound quality. 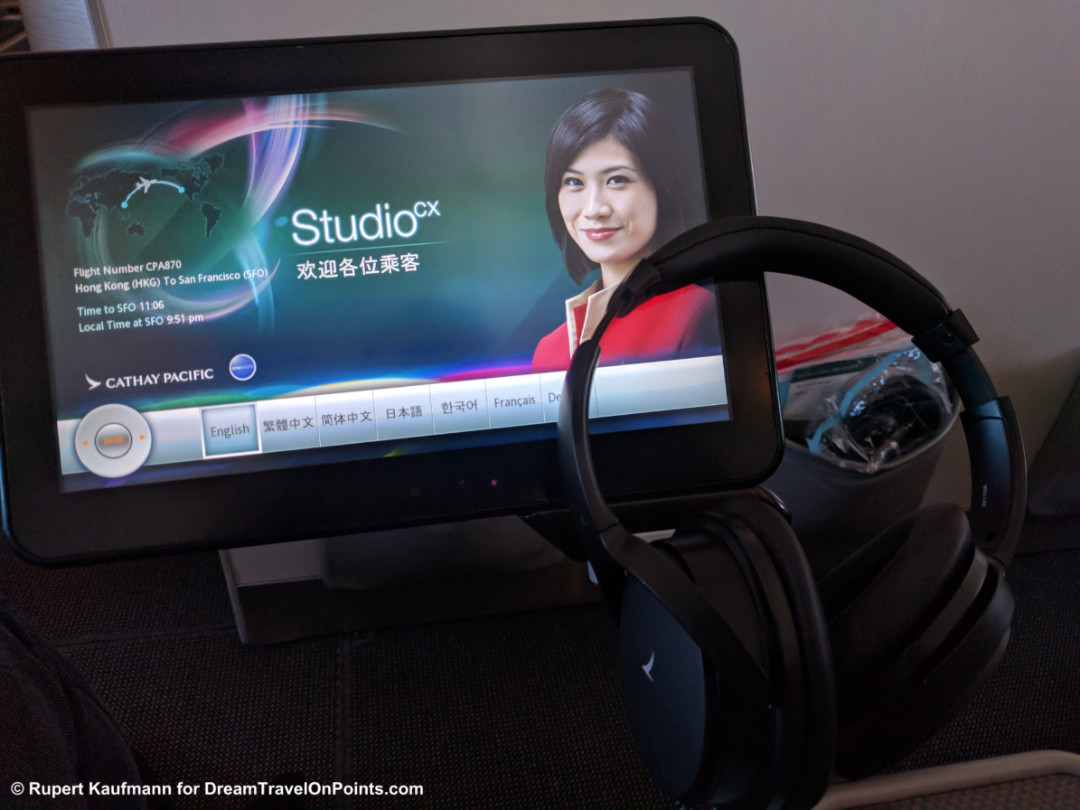 Amenity Kit: Upon boarding, Premium Economy amenities were already waiting at my seat. The pillow and comforter were of good quality, comparable to what I’ve received in business class on lesser airlines. The amenity kit was a simple cotton bag with socks, an eye mask and dental kit.

Entertainment: The entertainment system offers a good selection of TV and 100s of movies from around the world, so everybody should be able to find something. I like the ability to see what will be playing on the Cathay Pacific website, giving you a chance to pick something you like ahead of time or bring your own entertainment if you don’t like it!
I’d consider the inflight entertainment top notch, both in quality and selection.

Bottomline: Cathay Pacific advertises Premium Economy as a class between Economy and Business Class, with “convenient check-in”, “premium cabin service” with a glass of champagne and personalized service and “fresh flavors” served on porcelain dishes. They didn’t deliver any of this, instead providing a mediocre Economy Class experience with a slightly nicer seat and an amenity kit! While the hard product is a good start, the lack of service can’t justify the roughly 50% higher price over an economy class ticket and I recommend to avoid it. I’d rather save the money and book an economy class exit row seat on ANA, Thai Airways or Singapore Airlines for a better experience at a lower price point! I’m not recommending Cathay Pacific Economy as an alternative – my experience wasn’t any better and you can read my detailed review of that cabin soon!