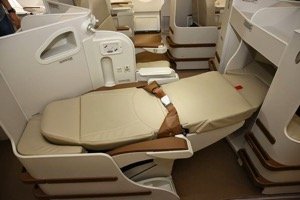 Philippine Airlines (PAL) Business Class is often cheaper than competitors, but has different seats and entertainment on different routes, so read my review to find out what to expect before you book! Philippine Airlines Business Class offers great service and tasty food on all flights. On their new B777 and A330 planes, you will find fully flat seats for a comfortable sleep! Find out the details of the PAL business class experience below

The Philippines are a very price conscious market, and you can often score deeply discounted tickets in economy and business class. We were able to snatch business class tickets to London, roundtrip for $1,475 at a huge travel fair – what’s not to like? PAL has different business class configurations and I flew both, their Boeing B777 and the older Airbus A340. I flew their brand-new Airbus A330 in economy (read my review here) and took a peek at their newest business class product as well. As you will see, the hard product is very different by plane, so read on to find out what to look for!

Pre-Departure: Regardless of the plane, PAL allows business class passengers to check at least 30kg of luggage, more to certain destinations: To Europe, Australia and a few other locations it’s 40kg and to the US it’s two pieces of up to 23kg. I found them to be generous in the check in process and not quibble over a few grams. At the airport in Manila, PAL has separate counters for business class, and in each case I only had one person ahead of me, making the wait short. Check in was friendly and quick. On my most recent trip to London, I had booked a separate ticket for my onward flight on British Airways from London to Hamburg, Germany, and the agent was able to check my luggage through to the final destination, without any issues – different from the policies of American Airlines, Delta and United! Immigration and security were quick, and I was on my way to the (recently renovated) Mabuhay Lounge to wait for my flight. Business Class passengers have priority boarding and it was quick without issues in each case. 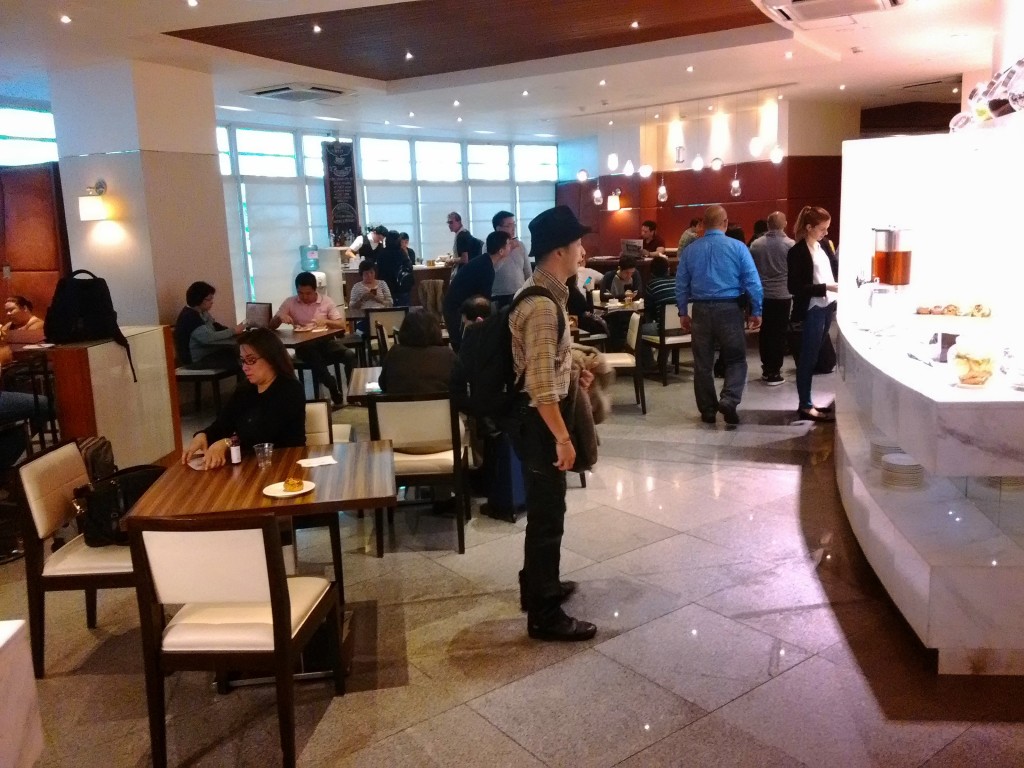 Service: The service throughout the flight was friendly and attentive on all four flights I took. Our flight attendant, Gwen, introduced herself at the beginning of the flight and did a great job throughout. While the staff is not as perfectly trained and disciplined as on Singapore or Cathay, they make up for it in warmth and friendliness, similar what I enjoy so much on Thai Airways, and lightyears ahead of the American carriers.
The food is consistent across the different planes and I enjoyed it on each flight. After early morning departure from Manila, breakfast was served, starting off with fresh fruit, a choice of breads and croissants, jam, butter and chocolates! I  had to borrow them from my friend, because mine didn’t last until the photo – they were delicious! I picked a Beef Tenderloin and eggs for the main course and it was ok. The eggs were perfect, but the steak was (too) well done and the potatoes were a little soft. 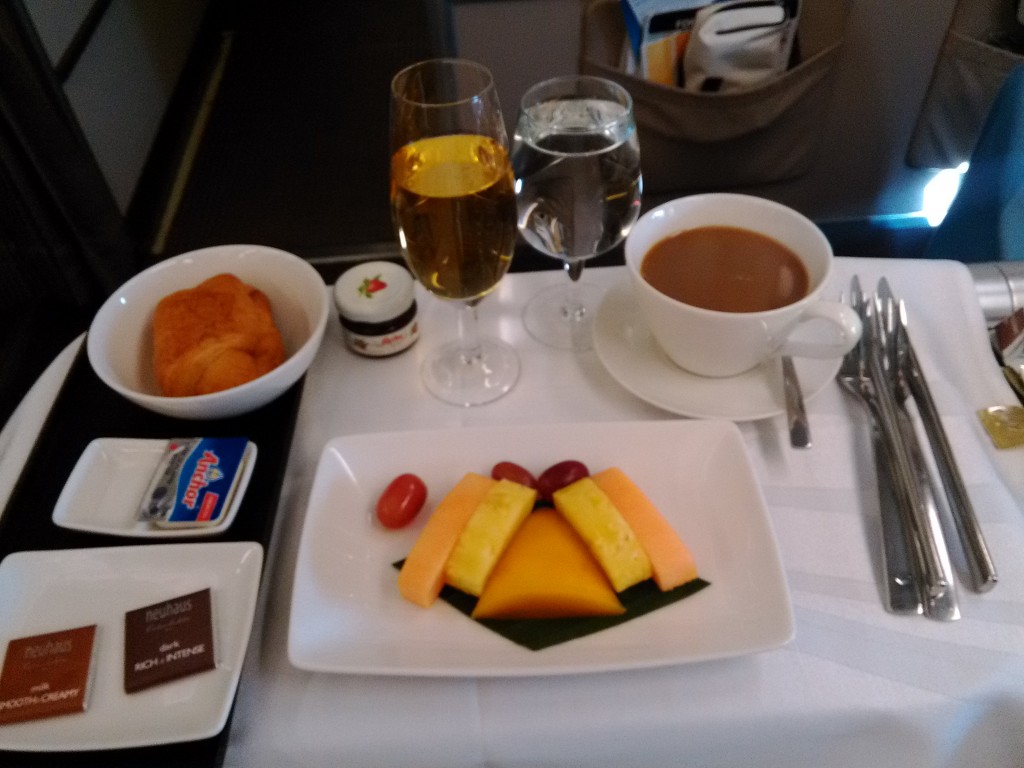 I had a glass of Heidsieck Champagne with it, very nice! The coffee was good, but came with – gasp – creamer powder – something not uncommon in Asia. If you wanted to sleep, you could request an express meal served two hours before arrival. Snacks were available throughout the flight.  Instead, I had lunch halfway into the flight as the second meal and the menu looked like this: 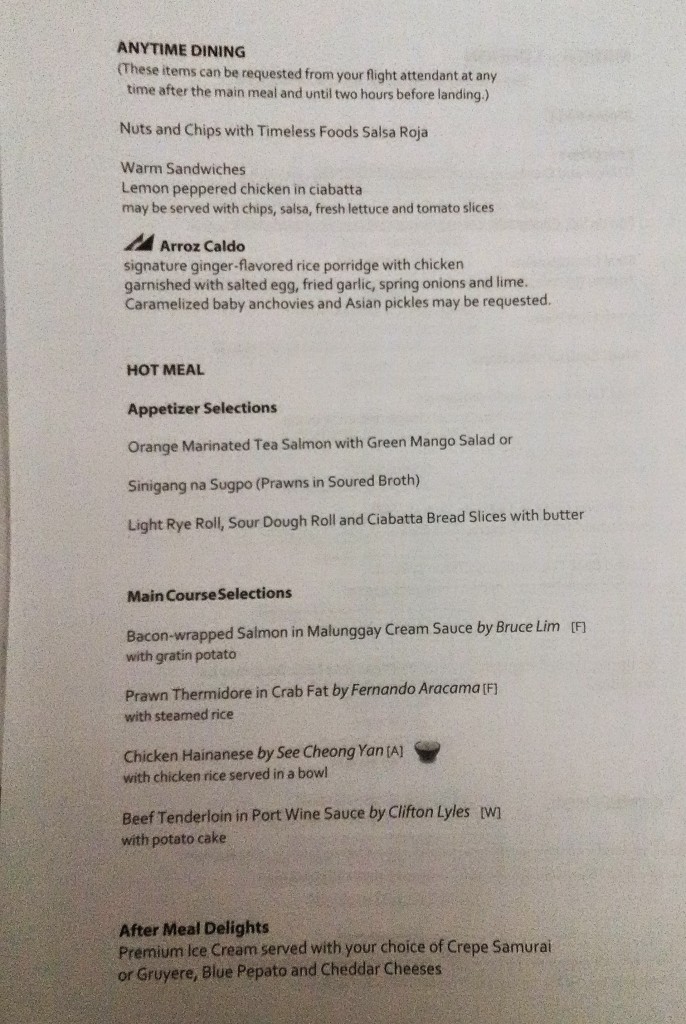 PAL seems to cater the meals without spare meals – several people didn’t get their choice for breakfast, but they got to go first for the second meal. When it was my turn, only two of four choices were left, but my favorite was among them, lucky day! If you fail at first, try, try again, and I had steak (I do like steak, really). This time, it was much better, cooked perfectly and very tender. The potato cake and veggies were as good, making that an excellent meal with no complaints. I had a glass of red wine with it and it was a good fit – and much better than what qualifies as wine these days on United! I had ice cream and a crepe for desert, rounding out a nice meal. While we were a little anxious about the connection, our luggage did make it through to the final destination on British Airways without issues!

Hardproduct: As mentioned, PAL flies a number of different planes  and Philippine Airlines business class seats vary greatly from plane to plane! Unfortunately, seatguru also doesn’t have accurate descriptions for the different planes, so read on what you will find:

Philippine Airlines A340 Business Class: On the Airbus A340, the business class cabin is in the front of the plane, with 6 rows in a 2-2-2 layout. The A340 were bought used and the seats show it – SeatGuru calls them “recliner”, the dreaded r-word for any frequent business class traveler, I’d call them angled, almost-flat. The seat moves from the seating position in stages to the almost-flat position, allowing to sit for meals, lounge for movies and fully recline for resting. It has a back massager that works pretty well. In full recline, the leg portion is parallel to the floor and the seat back is slightly angled up. While not completely flat, you don’t slide off it, so I slept about as well as on the old Lufthansa or Thai angled flat seats, but much, much better than the old United, Delta or American Airlines business class recliners. The seat is reasonably wide, well cushioned and I had a good rest, despite the early morning departure. Each seat has a personal, fold-away video screen, but curiously, the crew also handed out Apple iPad mini’s, loaded with movies, TV and games. Both have slightly different movies available, so you get a choice of films and ways to look at them. 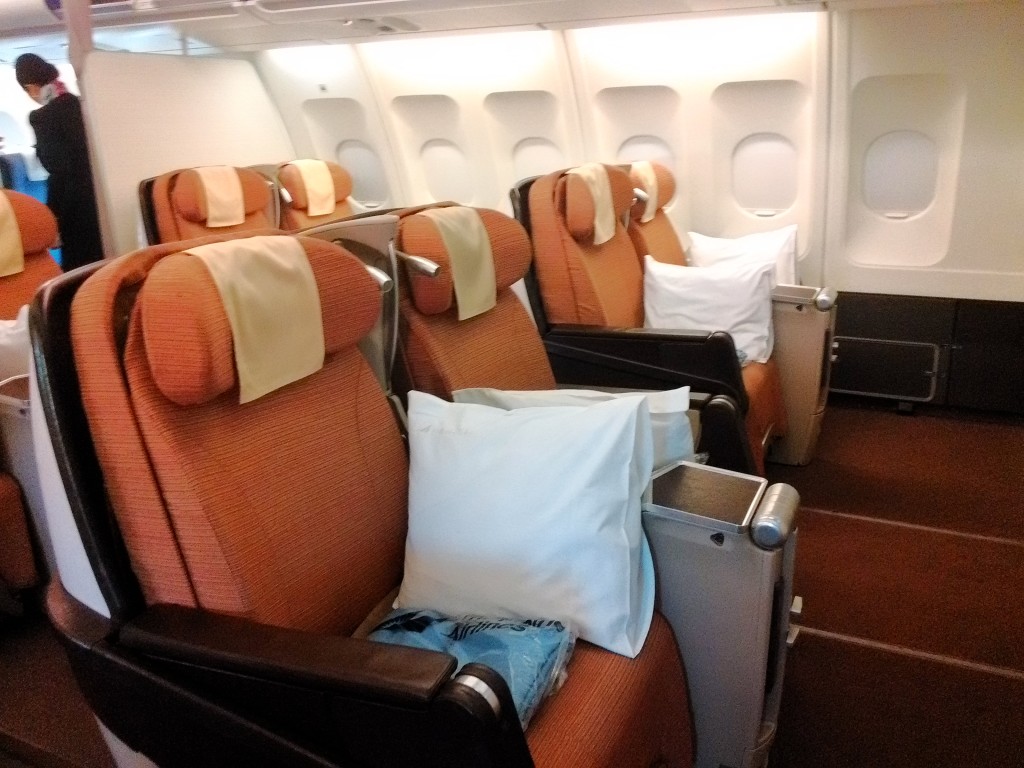 On the Boeing B777, the business class is also at the front with 6 rows in a 2-3-2 configuration. The seats are angled flat, although the angle is very slight and they are very comfortable to sleep on, much better than on Thai Airways angled seats – no sliding down here, due to the foot rest at the bottom. While there is no direct aisle access for all seats, they are spaced generously and have nice width, making them as comfortable as the full-flat, but narrow United seats in their 2-4-2 configuration. They have built in entertainment systems with good size screens. The selection is pretty limited with only 2-3 Hollywood A-movies and the rest B-/C- or older movies, as well as some regional favorites. The B777 is used on the flights to/from the US, so if that is your route, you are in good hands. 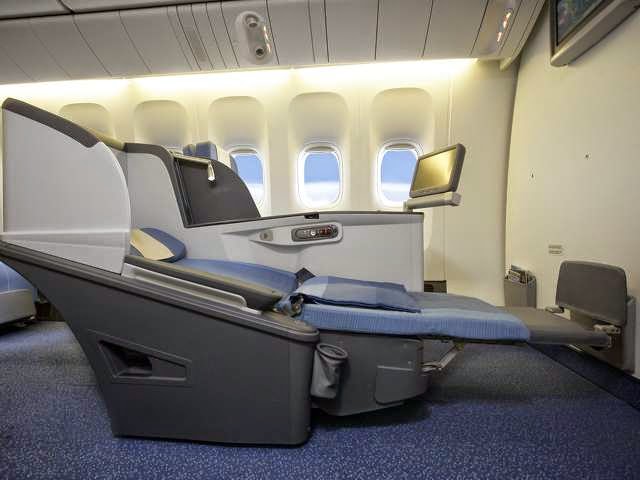 Philippine Airlines A330 Business Class (old): On the Airbus A330, PAL has installed fully flat business class seats with 3 rows in a 2-2-2 configuration. The layout is a little odd in that the foot rests of two neighboring seats are above each other, putting one seat low to the ground and one higher up! PAL is currently using them on regional routes, which makes them very competitive, as even Singapore Air and Cathay Pacific often fly recliner or angled flat seats in business class on those routes! 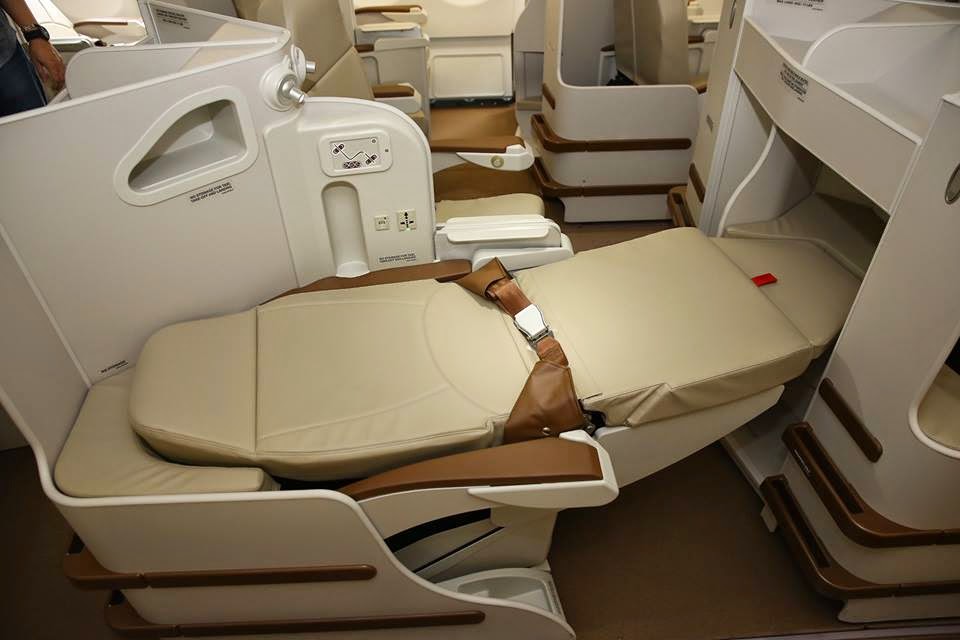 PAL is now replacing these seats on all Airbus A330 planes with their best business class offering yet. They are installing Thomson Vantage XL seats in a 1-2-1 layout, with fully flat seats and direct aisle access for everybody! It’s a long and wide seat and they will have privacy dividers in the middle. There will only be 18 of them on each A330, so prices might be a little higher than in the past! 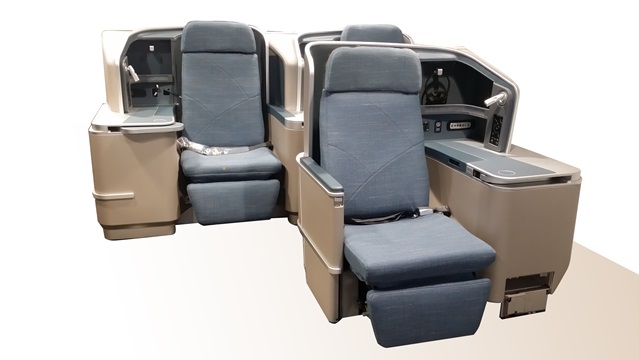 Rewards: Philippine Airlines has its own reward program, Mabuhay Miles and you still earn miles based on distance. In Business Class, you’ll earn 125% for promotional fares and 150% for all others. Read my Mabuhay Miles Review to find out, if it makes sense for you to sign up!
Redemptions for business class are good value for flights from Manila to Australia (40,000 miles one-way) or to California (58,000 miles one-way).

Insider Tip: PAL recently introduced a bidding option to upgrade your economy class ticket to business class. If you’d like to travel in more comfort without paying full price, you can utilize this option to fly business class for less! I’d recommend to try for long overnight flights!

Recommendation: Overall, I believe Philippine Airlines has an interesting offering. While in a pure product comparison, the other Asian airlines have a better hard product, when you take price into consideration, PAL has a very good offer. You can fly business class at a price others charge for  premium economy and regardless of plane type, that’s a great deal! While prices for business class have gone up recently, as long as they are cheaper than other airlines, I will certainly continue to look for good deals!
And, if you are planning a trip to the Philippines, check out my Mini-Guide Manila – it’s worth to plan a stop-over in the bustling capital city!
Would you fly PAL’s Business Class at the right price? What is your favorite thing about PAL? Let me know in your comments below!