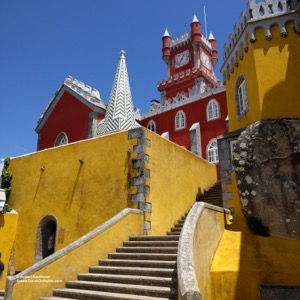 If you have a few days in Lisbon, I recommend you include a day-trip to Sintra, only 45 minutes from the city in the mountains, with two fantastic palaces, an old fortress and a chance for some nice hiking! The beautiful setting has inspired a few writers in the past and attracts lots of visitor today to spend a day or three in the scenic environment and enjoy a mix of nature and history!

I visited the three main sites on a day trip and it made for a wonderful day! In the small town of Sintra, you’ll find the National Palace. While its origins go back to Moorish rule in the 8th century, the current buildings are all from the 15th and 16th century. The islamic artistic influence you see today was added later as a revivalist touch. You can easily spot it by its two oddly shaped towers from afar. It’s very well restored and you can take the tour of the interior to get an idea of how the royals spend their summer days in the countryside. I especially liked the story of the “magpie room”: supposedly, King John I was caught kissing a lady-in-waiting and had the room decorated with one magpie painted for every lady at the court. They all hold the emblem “for honour” in their beak… 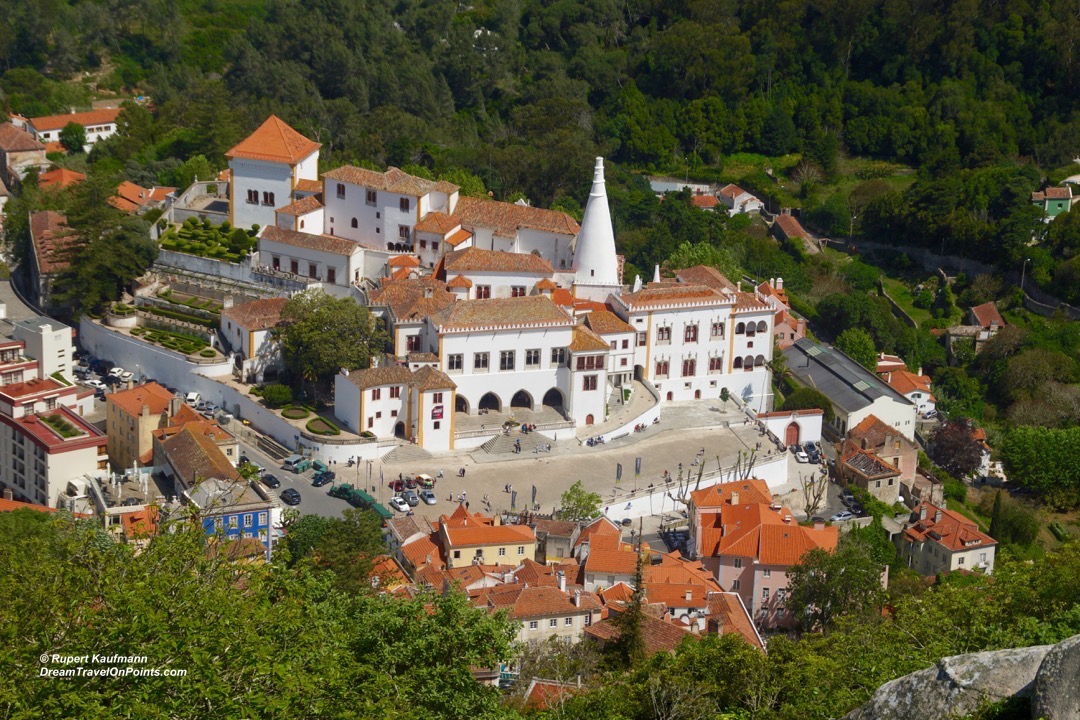 The second attraction in Sintra is the Moorish Castle on top of the hill, setting a stark contrast with its simple, yet massive walls. It also goes back to the Moorish period, but fell into disrepair as it lost its importance for defense and is a ruin today. Once you made your way to the top of the walls, it’s easy to see why they picked the spot for a fortress: you have a few all over the area, as far as the ocean and the approaches to Lisbon! And it is tough to reach – it sits on top of the highest granite cliff in Sintra, today a popular destination for sports climbers! Once you have taken in the stunning views, you can explore the King’s Tower, the favorite spot of the artist-king Ferdinand II to paint, an old cisterne that stored more than 600,000 liters of water and a small museum showcasing some of the archeological finds of the area. 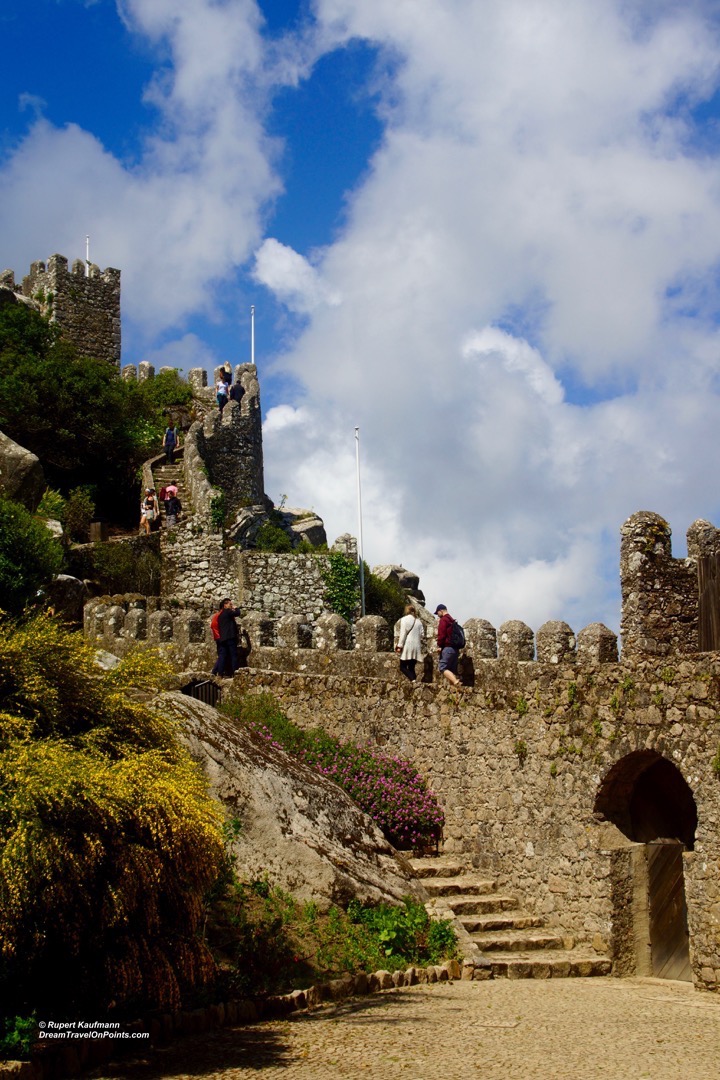 The last and for me most interesting site is the Palace of Pena, an unusual palace on the mountain top. It started as a monastery in the 15th century and was transformed into the summer palace of the royal family in the 19th century by King Ferdinand. The palace incorporated many contemporary, medieval and islamic design elements, turning it into an unusual mix of styles, enhanced by bright colors! I loved the sights of the palace as much as the views from the palace over the surrounding lands! 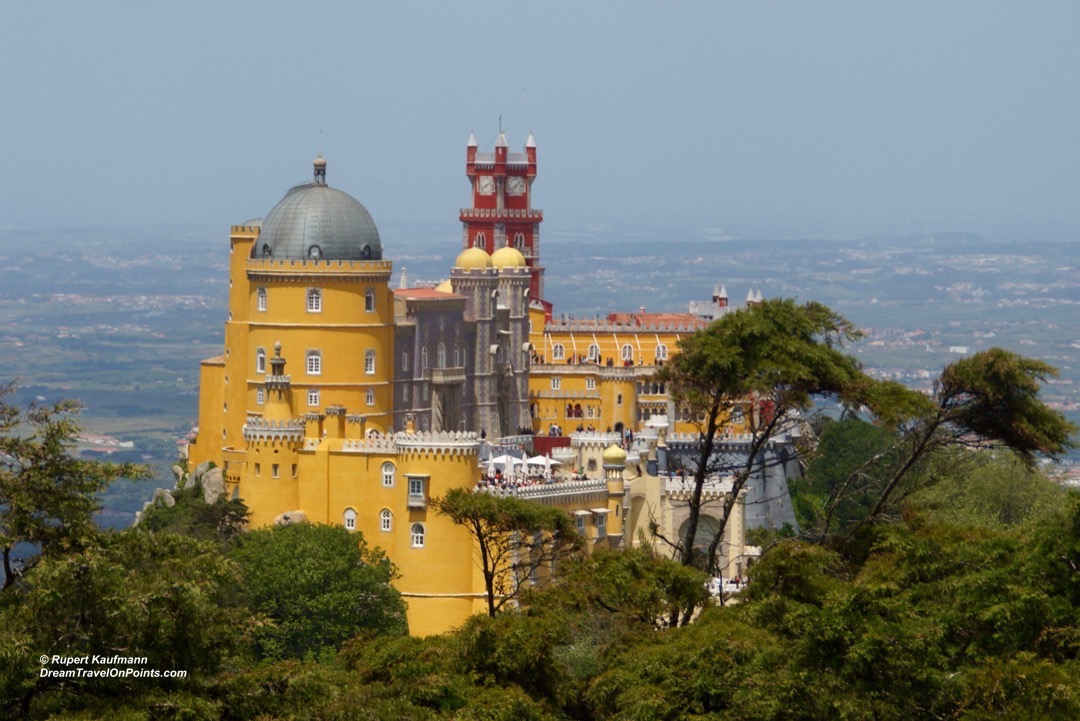 Travel Tips: Sintra is a popular destination and can get crowded with visitors. If you want to avoid the crowds, you can stay overnight and do your sightseeing in the morning and late afternoon to avoid the day-trippers.
If you want to visit for a day, I would recommend to go on your own instead of joining a tour group – being herded through the palaces in a large group is no fun, I was stuck between two of them for a while and it gets very crammed! I also wouldn’t go by car – the streets are narrow and congested and there is not a lot of parking!
It’s easy to do by train to Sintra and with the tourist bus 434 that goes to all three sites. But instead of following the standard route (National Palace, Castle, Pena Palace), I’d suggest to stay on the bus till Pena Palace to explore it before the crowds arrive, wander back to the Moorish Castle and then either hike down the mountain or take the bus back to Sintra for a meal and the tour of the National Palace late in the afternoon before returning to the train station!