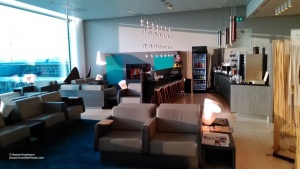 On my recent Baltic Explorer trip I was connecting at Amsterdam’s Schiphol airport on my way to Helsinki. Arriving in the early morning after a 13h flight from Singapore, I was looking forward to a shower to freshen up for my day and made my way to the Aspire lounge, the contract lounge of Singapore Airlines and a Priority Pass partner!

And a long way it is: The Aspire lounge is located near the E-Gates and well sign-posted. You have to make your way through a construction zone to reach the newly renovated lounge. The first surprise was that I was denied access as a SQ First Class passenger: Apparently, SQ only contracts for departures. Fortunately, Aspire is also a partner of Priority Pass, so I was able to enter with my membership card. The next surprise was that the lounge doesn’t include the shower I was hoping for – it was an exorbitant EUR17,50 extra pay. I love a shower after a long flight and paid grudgingly. The shower is more of a stall than a suite, with a large open shower and a small sink. It’s held in modern, brownish tiles and looks good. Unfortunately, it’s the smallest shower I’ve ever seen at an airport: there is no room to put your luggage, no door to the shower to keep it dry, no hangers for your clothes and no shelves for your toiletries (near the sink or in the shower). The shower floor wasn’t graded properly, with the water collecting near the low barrier to the room, threatening to flood my luggage if the shower was too long. A large and a small towel as well as shampoo and shop bottles were provided, but no dental or shaving kit! To add insult to injury, the automatic faucet stopped working half way through my shave, leaving me with foam all over the face and no water… Overall, that was not quite the shower experience I hoped for and they have work to do to improve… 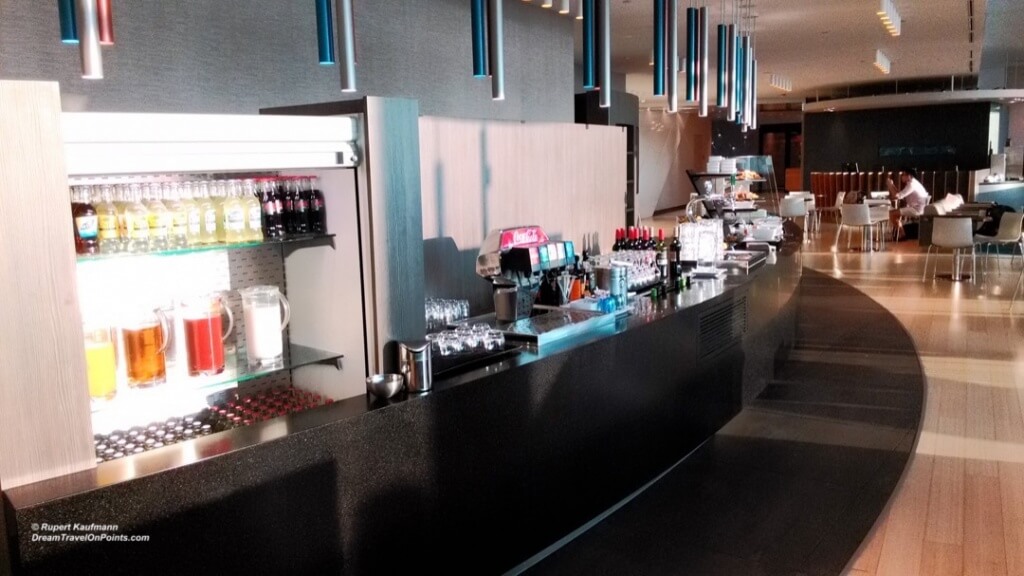 The rest of the lounge is very nice, I liked the modern, Scandinavian-style decor. Light is flooding in from floor to ceiling windows with a view over the air field. There is a buffet with a small selection of snacks, soft drinks and alcohol as well as a (great) espresso maker! You can sit in a bistro style dining area, high bar tables or in comfortable leather chairs and sofas.
There is a separate area for Singapore Airlines, with their own food, drink and newspapers – that I got to look in from the outside on my first visit. I did come back on my return trip as a Singapore First guest. The experience in the “exclusive” SQ area isn’t any better than in the rest of the lounge. Curiously, there was no food/drink offering when I arrived, so I had to use what was offered in the regular lounge.

Overall, the lounge is comparable to other lounges I’ve seen in Europe, modern, basic food and drink. The service was professional, but not very friendly, also par for the course. For a brandnew lounge, I was disappointed with the shower offering, especially considering the extra pay required. The Singapore Airlines portion appeared uncharacteristically disorganized and lacking the upscale touch I’m used from other SQ lounges! If you are flying out on Sinagpore Airlines or have a Priority Pass membership, it provides you with a place to spend your time, but not much more. If it’s a long way from your gate, you might as well enjoy one of the many restaurants around the terminal.