Asiana Airlines is one of two Korean carriers and is flying all around the world. They are a fairly new airline that was founded only in 1988 to break the monopoly of Korean Airlines and has grown rapidly ever since. Because Seoul is a convenient stop-over from Asia to the US and because they are a StarAlliance carrier, I wanted to learn more about them! 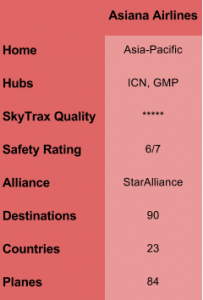 Who are they? Asiana (OZ) is one of two Korean carriers and based in the capital Seoul, with an international hub at Incheon Airport (ICN) and a domestic hub at Gimpo (GMP), both just outside the city!
Asiana is serving 90 destinations in 23 countries. They fly to 22 Chinese cities, making them one of the largest carriers to the Chinese mainland, as well as to Europe, Australia and the Americas. Asiana has a fleet of 84 planes, standardized on Airbus A320 family narrow-bodies and a mix of Boeing and Airbus wide-body planes.
Asiana is a full-service carrier offering First, Business and Economy class cabins as well as lounges for premium cabin passengers and frequent fliers. Not all routes offer all cabins.
Asiana is one of only 8 5-star airlines as rated by SkyTrax, on the same level as my favorite airline Singapore Airlines or ANA All Nippon Airlines!
AirlineRatings gives them a 6 out of 7 safety rating, with one star deducted for the crash of Asiana flight 214 in San Francisco that caused the death of 2 passengers! Asiana had four other incidents in their history, two with fatalities. 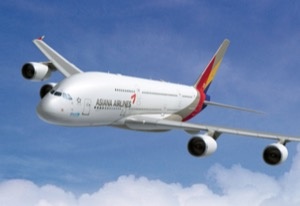 Why should I care? Asiana’s hub in Seoul makes them a great choice for flights between Asia and North America and Seoul’s Incheon airport is rated as 1 of only 5 5-star airports around the world, making for a convenient transfer. The high number of destinations in mainland China makes them a great alternative to lesser rated Chinese carriers to those destinations!
Despite their short history, Asiana has earned their five-star rating and offers excellent in-flight products and service in all cabin classes! If you are used to the shoddy product and service of the big US carriers, you are in for a treat – read my review of the Asiana Business Class and their lounge in Seoul to find out why! (coming soon)

What else should I know? Asiana is a member of StarAlliance, making them a great choice to earn or redeem miles in United’s MileagePlus program. You still earn UA miles based on distance when flying Asiana – and you can redeem miles for a much better flight experience in premium cabins!