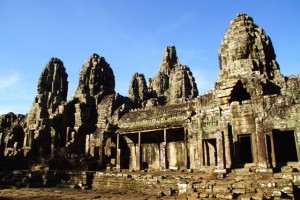 Over the last few days, I have posted about Banteay Srei, Angkor Wat and Ta Phrom – my favorite temples and must-see recommendations for anybody visiting the famous Khmer temples of Angkor around Siem Reap, Cambodia. There is one complex that represents the height of the Khmer kingdoms – Angkor Thom, the capital city at the end of the 13th century! 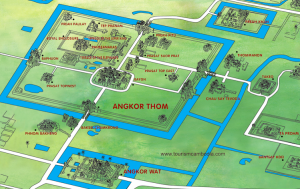 The last capital of the empire covered a square of more than 3km, fortified by a moat, earth embankments and walls. Within it were temples, like Bayon at its center, and Phimeanakas, the Royal Palace, as well as housing for the priests and military (most likely all made of wood and vanished). The map (courtesy of “Tourism of Cambodia”) gives you an idea of how huge the overall complex is, compared to Angkor Wat or Ta Phrom! It is hard to wrap your head around the splendor of this city in its heydays – in comparison, Berlin, London or Paris were tiny at that time! 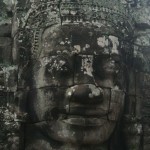 You will approach Angkor Thom via one of the bridges across the moat through the entry gates – the stone figures of demons and gods guarding the entrance to the city alone would make a worth wile trip, do take the time to check them out! At the center of the complex you will find the Bayon, the last state temple built at Angkor, around 100 years after Angkor Wat. What I remember most are the huge faces carved into the temple’s towers – hundreds of them! They seem to serenely smile over you and create an atmosphere like nowhere else in Angkor. 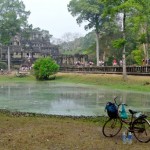 If you continue from the Bayon into the forrest, you will find the temple of Baphuon. It is a massive, three-tiered temple mountain just to the South of what is believed to be the Royal compound. A causeway leads to it, through what must have been ponds and grounds. You can climb up to the top level, but it’s steep so safe your breath, bring some water and watch your step! 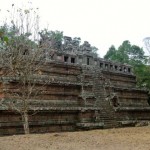 Moving on through the forrest and into the Royal grounds, you reach Phimeanakas. It has the shape of a three-tiered pyramid and legend has that it was topped by a golden tower, documented by Chinese visitors of the time! 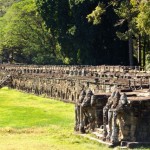 From Phimeanakas, you can make your way to the Terrace of the Elephants and the Terrace of the Leper King, a large viewing stand, overlooking the open field in front, so the king could watch the returning (victorious, of course) armies or celebrations. Considering the size of the open area, the parades and celebrations must have been quite a spectacle at the time!

I suggest to make your way from the Bayon to the terraces by foot – it’s easy to find and gives you a much better appreciation of the size of this Great City. Picture missing walls and towers, buildings made of wood filling in the space now taken up by forrest and you get an idea of the accomplishments of this culture hundreds of years ago!