All Nippon Air (ANA) is one of two major carriers based in Japan and I wrote an overview (here) and reviewed their business class (here). If business class is not in your budget, check out my recent experience in their economy class cabin! There are important differences between the global carriers, so it’s worth reviewing prior to your next trip!

Pre-Departure: ANA allows for two pieces of luggage up to 23kg (50lbs) with a size of up to 203cm (80in) total linear dimensions. StarAlliance Gold members can bring one extra piece of the same weight. While that is more generous than some American carriers, make sure not to exceed the weight limit per piece when packing for your trip. At the airport, I utilized the business class check in courtesy of StarAlliance Gold membership, but the economy class line was short and check in proceeded quickly.

Service: The service throughout the flight was professional, not as friendly as Thai or Singapore Airlines, but certainly better than what you’ll find on American carriers or budget carriers. English language skills were sufficient for the basic interactions and service provided. They came around with wet wipes (in plastic wrapper) and drinks, prior to the dinner service. The food service offered two choices, a Japanese and International meal. Both looked appealing on the card provided to choose (great idea for international flight – pictures are much better than “Chicken or Pasta?” yelled at you from the aisle!). Unfortunately, the marketing photo had little to do with the reality of the tray that arrived at my seat. I chose the international pasta and fish and it was about as bad as I have experienced on a plane, making even the food on budget carriers look good. I have had similar experiences on previous ANA flights, so this was not just “bad luck”. I’ll call that “two thumbs down” and suggest you bring your own food for a long flight! 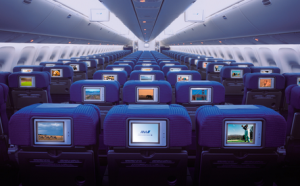 Hardproduct: This flight was a short-haul flight on a wide-body Boeing 767 and the Economy Class seats were in a typical 2-3-2 layout with a 31in seat pitch, making them somewhat tighter than other airlines. They did recline and had good padding, making them reasonably comfortable for a short flight. Each seat has a small, personal video screen with a selection of movies, short films and music. While the selection was limited, it did come in many languages, so you should be able to find something in your language to occupy your time. This was an older plane and there was no power port or USB port, which ANA has in their newer planes. If that is important to you, make sure to check the equipment prior to booking your flight.

Conclusion: While I enjoyed my recent business class flight on ANA (read here), the economy class was not enjoyable for me. I’m very tall at 191cm (6ft3in), so a 31in seat pitch for an international flight is something I will try to avoid. While having a personal screen in economy is better than not (like on United), it’s an old LCD screen, the movie selection is limited and there are no power or USB ports. Add some of the worst food on international carriers and I will not seek out ANA for economy flights. I’d still pick them over a United international economy flight, but there are better products on your way to Asia from other carriers, so check around before you book! You might also want to look at ANA’s Premium Economy – a true step up from the regular economy class!