All Nippon Air (ANA) is one of two major carriers based in Japan, together with Japan Airlines (JAL). They started as a domestic carrier, launching international flights in 1986. Today, they are the largest Japanese carrier with flights all-over the world and are a part of Star Alliance. I have flown them a few times in Economy Class on short-haul flights in Asia to connect to United and, recently had an (unplanned) chance to fly their best Business Class product on the Boing 777-300ER from Tokyo to San Francisco. It turned out to be a very pleasant flight: 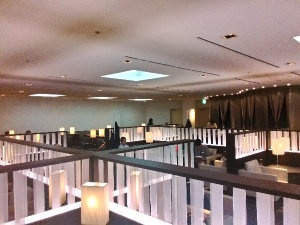 Pre-Departure: You can pack generously when flying ANA Business Class – your ticket includes 2 pieces of luggage up to 32kg. At the airport, you will have access to separate Business Class counters and the check-in was friendly, professional and quick. There is a separate line for Business Class (and StarAlliance Gold members) to get you through immigration and security quickly, which helps with a premium end-to-end experience! You will also have access to the ANA Lounge, with two options at the Narita airport, both comfortable places to wait for your fight. Business Class passengers have boarding priority, so you can get settled into your seat quickly. Unfortunately, economy class boards through Business Class, so it will be a busy place until the doors are closed. 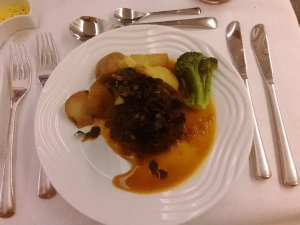 Service: The service throughout the flight was friendly and attentive. While some of the flight attendants in business class only speak limited English, making even basic requests difficult, the flight attendant who took over service for my seat was fluent, exceptionally friendly and happy to assist with special requests. Pre-departure drinks were orange juice or sparkling wine, served in plastic cups, not much of a premium experience there. The amenity kit, pillow, blanket and pillow top were already at the seat.  After a cancelled flight and 36 hours without sleep, I requested a quick service for the meal after departure to get much needed sleep. While that is not a regular offering, she made adjustments to the meal schedule and I had my meal quickly – that level of personal attention speaks well for ANA! 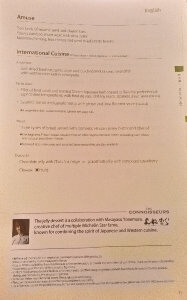 After a few flights in Economy and experiencing the lounge food, my expectations for the meal were not very high. You have a choice of Japanese and International menu, which defines the appetizer/dessert components of the meal, as well as two choices of the main course. I picked the International menu (see photo) with the filet as the main course. The first appetizer was rather unappealing, the carpaccio that followed was presented well and tasted good. The main course was also presented well, the steak was very good quality meat, but a little dry. Overall, I’d call that an average business class meal, comparable to United, but not as good as Singapore or Thai.

The second meal was breakfast served pre-arrival. I opted, again, for the International menu, in this case an omelette with sausage and potatoes, accompanied by a small fruit bowl, coffee and juice. The omelette and sausage were pretty good, but drenched in an odd-tasting sauce, together with the dried out potatoes making for a less-than-average meal. 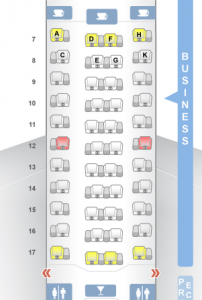 Hardproduct: ANA offers different business class products depending on the plane, so it’s important to check out the plane before making a booking. The majority of planes (767, 777) have old-style recliner seats, which are ok for daytime, medium-haul flights, but I wouldn’t want to be stuck in on an overnight flight. My US-bound long-haul flight used a Boeing 777-300ER with their full-flat, staggered seats, making for a premium experience. As you can see from the photo (courtesy of Seatguru), the seats are arranged in a 1-2-1 staggered layout, all facing forward, giving everybody direct aisle access and varying degrees of privacy. I’d consider the single window seats with the shelf at the aisle the best choice. I had a window seat with the shelf near the window, which gives you limited views out and people will bump into you as your seat is right next to a narrow aisle. The middle seats are fine for couples and when traveling alone, I’d prefer the seat with the shelf to the aisle for privacy as well. The layout makes for good to great privacy at every seat!

The seat itself is one of the my favorite business class seats. It moves from full upright through reclined to fully flat position, ensuring that you can find your most comfortable sitting, lounging or sleeping position.  It is reasonably wide (seatguru calls it 21in) and you can get some extra space by folding the arm rests away. It is very long, so even at 6ft3 I was comfortable. The foot cubby/shelf is full width, much better than the narrow cubbies you find on United or other airlines. You receive a pad to cover your seat in the bed mode, making for a very soft and comfortable rest. I wish all airlines would provide that! The combination of privacy, long and wide seat, plus padding made for some of the best sleep I have had in a business class cabin, which is my top priority on an overnight flight! It also has a do-not-disturb light, so you can skip a meal to get more sleep, if you want! You can see more details on the ANA site here.

In addition to the large, permanent shelf to your side, you have what must be the most stable tray I have seen on a plane. It pulls out from below the Video screen, is very large and seems engineered to hold major weight – no shaking or wobbling here! There is storage for a bag under the ottoman, but limited storage around your seat for small items. You do have a power outlet and USB port under the video screen. I liked the fixed 17in video screen – it’s large and you can start watching a movie as soon as you get settled in. I prefer that over the folding screens in herringbone layouts that are not available till after departure! I found the entertainment offering to be mediocre. You get a limited selection of recent Hollywood movies and a larger selection of Japanese and regional movies. They do come in many different languages for a global audience, so you are not stuck with English. This is barely on par with the offerings of the US carriers and no where near Singapore, Thai or the Middle-Eastern carriers. On the plus side, you have a touch-screen and fairly intuitive controller, making it much better than the old, hard to figure out controller ANA has on other planes.

Conclusion: ANA gives you pre-departure service that is similar to other airlines, one of my favorite business class seats, good service and average food and entertainment. On routes to North America, I found ANA fares to be competitive with United or Delta and lower than Singapore Airlines or Cathay Pacific. At similar fares, I’d take ANA over United in a heartbeat. If you want the best product in the air, other Asian carriers still have a leg up on ANA, but with the price considered, they are very competitive and I’d fly them again in the future, as long as their fully-flat seat is involved.