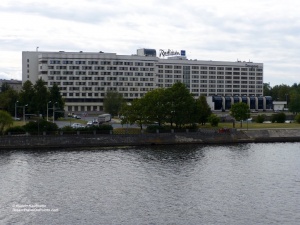 My second hotel in Riga, as part of my Baltic Explorer trip, was the Radisson Blu Daugava hotel. I had picked it based on value alone – at 15,000 points for two nights (a value of $30/night), and I didn’t expect a whole lot. It turned out to be a great bargain upscale hotel in Riga!

Location: The location of the hotel was my key concern when booking: It is located on the other side of the Daugava river facing the old town. The good news is that you’ll have what must be the best possible view of the old town over the river. The bad news is that your walk to the old town across the ridge is about 15 minutes – or you’ll need to take one of several trams going across the river and around the old town, which is more convenient but takes about as long! If you don’t mind the walk (I didn’t) and enjoy the views (I suprisingly did), it’s not a bad compromise! Check out my Baltic Explorer map!

Service: The front desk staff was as polite and professional as the other Radisson Blu hotels I encountered on my trip – they were quick to check me in, recognized my Club Carlson status – and upgraded me again to a Business Class room! Many people complain about Club Carlson not “guaranteeing” an upgrade (and they don’t), but I have received real upgrades everytime except once. And not upgrades in name only that have a “club” lable on the door and not much else: suites, large rooms, great views and luxurious fittings! Housekeeping service was competent and quick, refilling amenities as expected and even offering a turn-down service with little chocolates – a nice touch. The staff at the restaurant in comparison was not up to task: Several of the staff were outright rude, they didn’t keep up with refilling the buffet (despite plenty of people around) and didn’t clean up tables, leaving the restaurant look like a bad food court! It felt like a throwback to Soviet times and the management needs a wake up call! 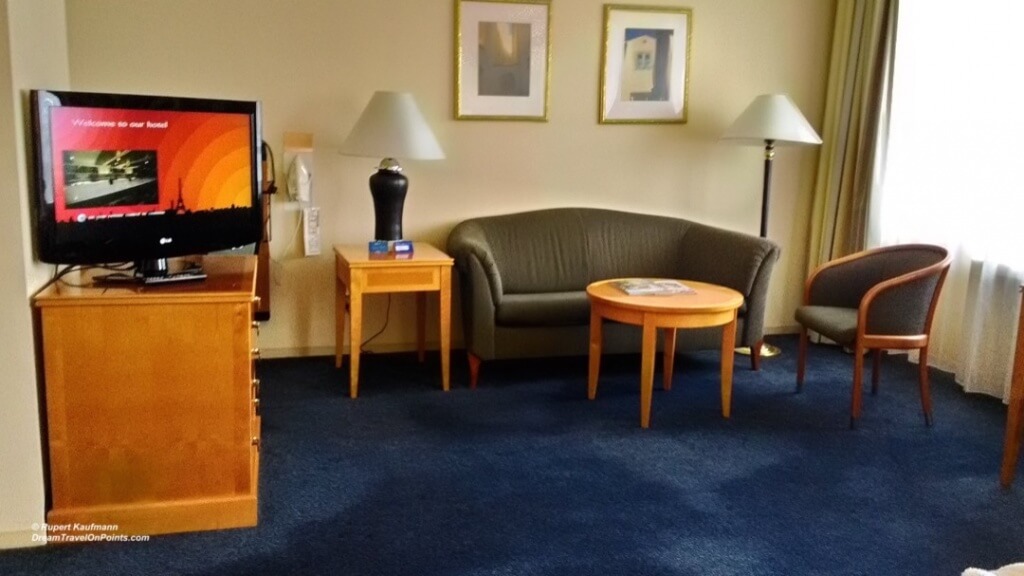 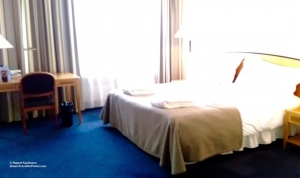 The best feature of my room was the great view over the river and the old town – I even had a little balcony to take some great pictures. The room was of good size with a separate sitting area, a work desk and a large, comfy bed. It had all the Business Class features, including a pants press, large TV, safe and a Nespresso machine! My biggest issue with the room is the decor. While you could probably call it classic, with its wall paper in the bedroom and bathroom (haven’t seen that in a few decades!), it just looked old and in need of a renovation! While it was kept clean, it couldn’t hide the age of the carpets, wallpaper, tiles and fixtures! The bathroom was good-sized with a shower-over-tub with a curtain, a single-piece sink counter and toilet. 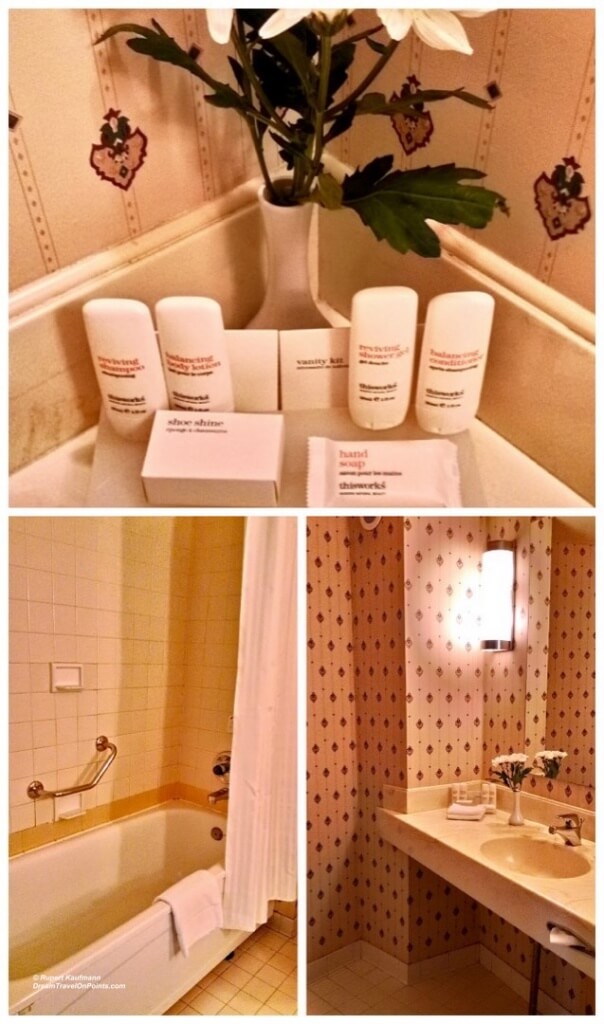 Amenities: The amenities are the biggest win at the Radisson Blu Daugava: In addition to some stores on the ground floor, it offers access to a full-size, commercial gym on the premises run by myfitness! It has regular memberships but is free for hotel quests and has a full complement of cardio equipment, weight machines and free weights, as well as classes. They utilized modern, high-end equipment that was well maintained, giving you a chance for a full workout! Even better, the gym includes a small lap pool (I’d guess 15-20 meters long), so you can swim as your workout or just relax and splash around. Add to that full changing rooms, showers and a large dry sauna and you’ll have a full gym and wellness center, all included in your room price! This is much better than most upscale hotels can muster – giving access to a professionally run gym is my favorite choice! 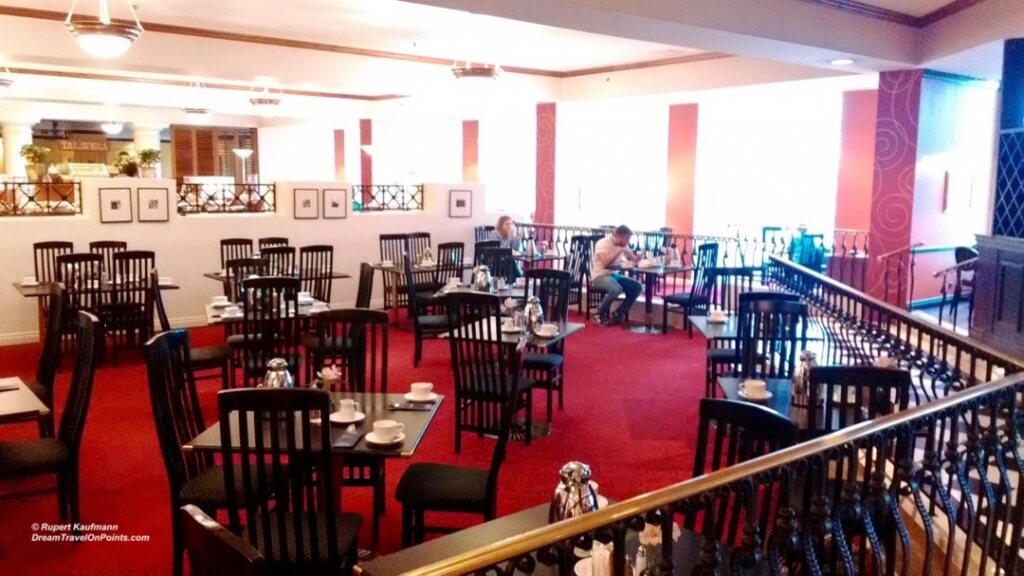 To my surprise and as a first in all my Club Carlson stays, the Radisson Blu Daugava included a free breakfast in the points stay – that is unusual and a great benefit! The restaurant is very large and some of the tables have a view of the river. The buffet is good, although neither the selection nor the quality of the food were as good as at the Radisson Blu Ridzene: they seemed to be cutting corners on the quality of pastries, jam and meats… It didn’t help that the staff was rude and didn’t keep the buffet stocked, further limiting your choices. Nevertheless, I left sated and ready to explore the city each day! 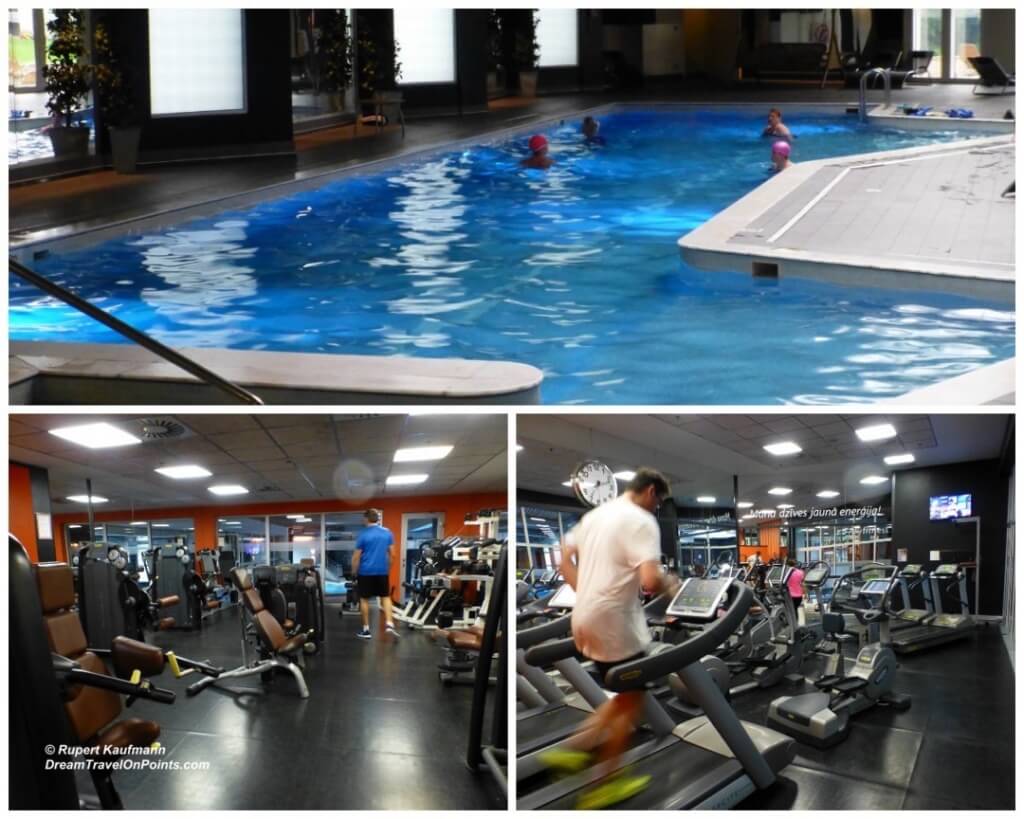 Conclusion: While the Radisson Blu Daugava is a little further from the old town, the rooms could use an upgrade and the staff was decidedly mixed, at only 15,000 points for 2 nights (a value of less than $30/night) the large room, free full gym and free breakfast were an exceptional value and the best deal of my Baltic Explorer trip to date! I have paid more just for breakfast and the gym alone and never had a better hotel for $30/night in a big city. Period! So, if you are looking for value, this Radisson Blu is a great deal!