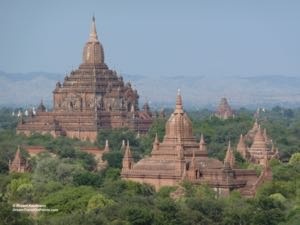 Myanmar has been in the news a lot lately – with the opening of the country in 2011, tourists are coming again to the country to see the amazing sights – and it’s well worth it! I went for the first time in 2009, after three aborted attempts, and was stunned by the friendliness of the people and the beauty of the historic temples! You should go soon to experience it – it is one of the few places in the world where you don’t wish that you’d gone 10 years ago, before everybody started to go! 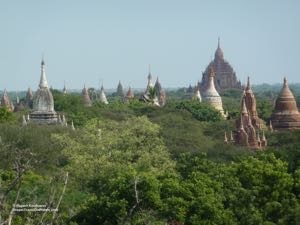 If there is one place that you should see in Myanmar/Burma, it is Bagan. From the 9th to 13th century, Bagan was the capital of the kingdom of Pagan and more than 10,000 temples and pagodas were built! You can still visit the remains of more than 2,000 temples today spread out around the plains of Bagan. While I have seen ancient temples in Angkor Wat, Central and South America, nowhere can you see hundreds of them in just one spot! Climbing one of the higher temples and looking around, seeing one temple next to the other, standing out from the red Earth and forest around Old Bagan, is one of the most stunning historic sights I have witnessed anywhere! 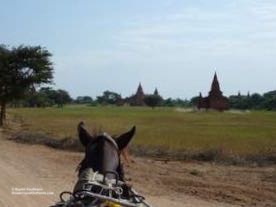 We arrived in Bagan on Yangon Airways, which – not very reassuringly – has the logo of a flying elephant! Our hotel was in Old Bagan and it really brought home how many temples there are: the remains of one of the old temples were on the grounds of our hotels, a few steps from our room! To make the most of the experience, we wanted to explore the temples as much on our own as possible and avoid tourist groups. For the first two days of exploration, we chose to hire a donkey cart! The pace of the donkey cart fit very well to the peaceful atmosphere of the area and we trundled from one temple to the other! Even better, by hiring your own transport, you can pick the temples you want to see, visit at your own pace and avoid groups of visitors easily! Rarely do you have the chance to see some of the most amazing, historic sites with so few people! We were able to climb some of the temples all by ourselves and just take in the incredible surroundings, slowly and peacefully! 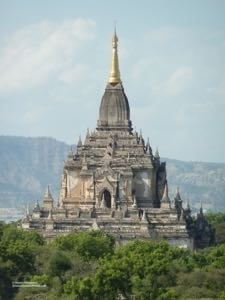 For the last day of our (too short) visit, we decided to go even more “low tech” and rented bicycles to tour some of the smaller temples nearby! It made for a leisurely trip and also brought home the point just how vast the area is and how many temples there are! Modern life has developed around it, with some of the smaller temples between the houses of the current inhabitants! While it makes it certainly difficult to protect this cultural heritage, it creates an unusual contrast between these century-old marvels and the modern houses with motorcycles in front! Rarely to you have people live around temple sites that are hundreds of years old!

Some of the key sites to see are the Thatbyinnyou temple, the tallest temple and hard to miss, the Ananda temple, one of the most beautiful ones, the Shwesandaw pagoda with great views or the red brick Sulamani Guphaya temple. 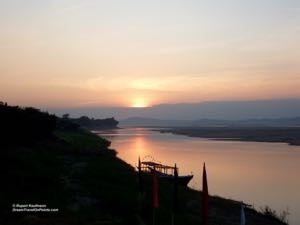 If you are are interested in the history of mankind, its great empires and the architecture and edifices they have left behind, than Bagan should be on your travel list! It’s right up there with the great historic sights like the pyramids, the Inka ruins of Machu Picchu or Angkor Wat in nearby Cambodia!