I have followed the airberlin insolvency closely and I was directly impacted by the ticket cancellations. The dramatic end of my airberlin travel saga was the cancellation of my award ticket for a flight on Etihad 1 hour before departure. I had already cancelled my backup flight when I received the dreaded cancellation notice, making this the most stressful flight in over twenty years of frequent flying! Fortunately, Etihad didn’t drag me off the plane kicking and screaming!

I have reported about the airberlin insolvency here and here and about topbonus insolvency here! Despite the cancellation of all revenue and award tickets operated by defunct airberlin, topbonus had repeatedly confirmed award tickets on partner airlines Etihad and OneWorld. I was able to re-confirm my award flight on Etihad with the airline, was able to get a business class seat assigned and even a chauffeur booked in Abu Dhabi from the airport to my hotel. 48 hours before departure, I was able to check-in online and was very happy that I was at least able to fly one half of my award trip. I went ahead and cancelled my backup flight on Singapore Airlines and packed for my flight!.

Soon after I had checked-in, messages surfaced on German frequent flyer boards that people received cancellation notices from topbonus that announced the cancellation of their award ticket operated by other airlines:

This cancellation was combined with the offer to use the miles used for the now cancelled flights to book a new Etihad Economy class ticket by November 19th, 2017 for flights through March 28th, 2018:

It seems like a generous offer at first with reasonable mileage amounts from 25,000-50,000 miles:

But in addition to the miles, you need to pay very high cash fees that can be more than a  ticket with another airline, making this attractive only for very few routes: 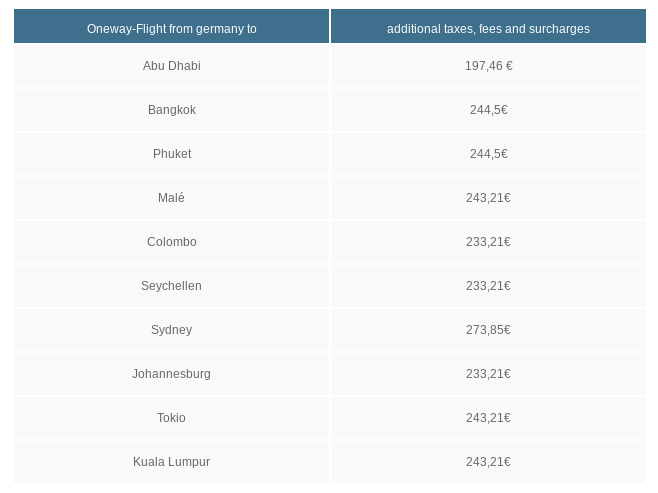 It stated in the email that the award tickets would be cancelled in stages and I was considering myself lucky to have been spared…
But I was celebrating too early – I was already at the airport, waiting in the lounge to board when I received an email notification for an airberlin email: Sure enough, my award ticket for the Etihad had been cancelled as well with less than 1 hour to go to departure!

With my backup trip cancelled, I was as close to panicking about a flight as I have ever been – I figured there is not much to do than pray that Eithad won’t drag me off the plane after I was already checked in. I had a glass of wine and waited for boarding. I held my breath when boarding was called. I was expecting the computer to beep a fierce alarm to point out the impostor trying to board without a valid ticket – but nothing happened! I was welcomed to the flight with a friendly smile, sent down the jetway, turned left and plopped into my business class seat. I gratefully accepted a glass of (good) champagne and said my quiet thanks to the gods of travel, old and new!

Now, with at least half of the award ticket rescued, I still received the note that I can use my miles for an Eithad economy ticket. While it is tempting to try, I don’t have any opportunity to fly Etihad between Germany and the world by March 2018 – and the only route I’d consider a good deal considering the fees would be Australia.

I feel bad for anybody still holding topbonus award tickets for future travel. I recommend to contact topbonus as soon as possible and try to attempt using the miles for a replacement ticket, if Etihad serves the route. Do make sure to check alternative flights – you might be able to find a cheaper ticket than the cash fees on popular routes to Asia.

Look out for a future review of Etihad Business class as well as Etihad Economy (used for the replacement of the cancelled airberlin flight) soon.
If you’d like to get more travel related news like this from around the world, please follow me on Twitter – I’m posting news daily, so you can stay up to date on the world of travel with my Twitter updates! Or, for a weekly update, sign up for my newsletter for a Sunday Summary!