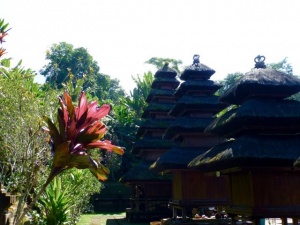 If you enjoy visiting temples on Bali, but don’t like the tourist crowds that come with the most popular ones, check out Pura Luhur Batukaru (Batukau). Despite being one of the nine directional temples on Bali and one of the most important, sacred sites for the local Hindus, it gets much fewer visitors than other temples, making for a relaxed, wonderful exploration of the site!

This Hindu temple is located on the slopes of Mount Batukaru, the second highest volcano on Bali. You need to take some minor roads to get to the temple from South Bali or Ubud, making it a little harder and less comfortable to reach than some of the others (probably explaining the lack of crowds!). You can combine it with a trip to Pura Ulundanu Beratan and the Jatiluwih Rice Terraces for a great day trip!
The temple was originally built in the 11th century and rebuilt in 1959 in the form you see today. It consists of multiple temples in the complex on the hill side. The main complex has multiple pagoda-style temples, with multiple arranged in a single walled compound with three, five and seven roofs stepping up from the entrance to the back. If you keep exploring along the paths, you can find more, smaller temples in the forest. A ceremony was being conducted at one of the temples during our visit and we watched the ritual from afar. We also found a small temple on a little island in a pond sitting among the trees – a very peaceful image! 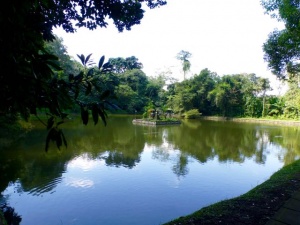 There is a small parking lot near the entrance to the temple compound. You have to pay an entrance fee of 15,000IDR per adult foreigner and you get a receipt – if you don’t, you just made a “donation” to the local economy. That includes the rental of the required sarong, so you don’t have to buy one (despite what some of the enterprising sales people say). Please keep in mind that this is an active temple and you won’t be able to go inside, if there are rituals being held! There are toilets as well as small shops for souvenirs and drinks.