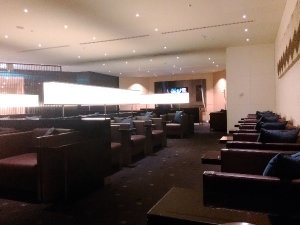 As a 1Million Miler on United, I have traveled countless times through Narita Airport as a stop-over between the US and Asia. On my most recent trip, I found myself for the first time connecting in Haneda, the main airport in Tokyo, mostly used by the domestic airlines. I had a 5 hour layover and was grateful to be able to relax in the ANA lounge that serves all StarAlliance flights.

If it’s your first time, there are two of them, one at the Western end (open till 1am) and one at the Eastern End (only open in the morning). After my arrival around 8pm, there was little information and no staff around, soI headed towards the lounge near my gate – and it was unfortunately closed, so I had to turn around to the main lounge. 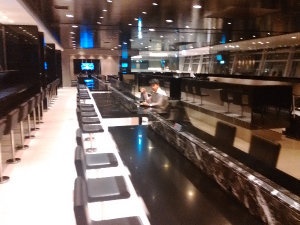 The staff at the lounge, both at check-in and at the buffet, was very friendly and helpful. The lounge itself is huge, separated into different spaces for food/drink buffet, eating, working and relaxing. It’s more modern in design than most US lounges, held in a mix of grey, black and white tones with some metal accents here and there, adding up to a nice ambience. There are soft drinks, coffee/tea and a selection of alcoholic beverages on offer, including Sake – this is Japan after all. I did not enjoy my meal on the inbound ANA flight and was hoping for some nice snacks, but don’t get your hopes up! The selection of cold and warm snacks, some local, some international, was ok – certainly better than what United offers. Unfortunately, the taste and quality was mediocre at best. If you arrive hungry, I’d suggest to stop at one of the airport restaurants before heading to the lounge. 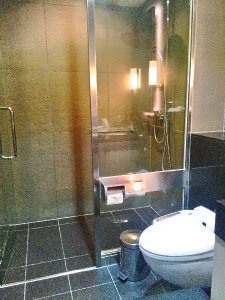 The lounge does have a few newspapers (incl. English language) and magazines, as well as free Wifi and an online entertainment offering (mostly in Japanese). The Wifi was reliable and fast, a welcome break from the often slow speeds in other Asian cities! With the long layover, I did take advantage of the shower rooms and they were very nice, new and spotlessly clean! You have a good-size private room with sink, toilet (with bidet seat – no worries, this one was easy to operate, no class required) and enclosed shower. Toiletries are provided and of good quality. At 26C, the room was overheated for my taste. If you arrive into Tokyo after a long flight, it’s well worth to stop by to refresh!

Overall, I liked this lounge better than the ANA or United lounges in Narita, making Haneda a more pleasant stop-over. If you do fly through Haneda, it’s worth to check it out!