China Airlines (CI) is one of two major carriers based in Taiwan (not mainland China). They are the countries largest and flag carrier, I have flown them in Economy Class before and scored an award business class ticket for a last-minute one-way trip from San Francisco to Taipei and Manila. This review covers the experience on their Boeing B747 and Airbus A340 aircrafts in Business Class – China Airlines is positioned at the budget end of network carriers and the experience was in line with that!

Pre-Departure: China Airlines is generous for business class passengers with regards to luggage: You are allowed two pieces of carry-on luggage (up to 7kg) as well as a personal item! In addition, you can check two pieces of up to 32kg – that’s a lot of luggage and in line with other carriers flying from/to the USA. My attempt to check-in online failed – after going through multiple pages and filling in all the requested information. At the airport, there was a separate Business Class counter and a staff member ushered me to an available agent for First Class. The check-in was very friendly and professional. They struggled with the entry requirements for my final destination (Manila, Philippines), but after much deliberation let me go. I received a lounge invitation (read more about that experience here) and was able to take a separate line for Business Class through security. The overall experience was very much in line with my experience with United or ANA at the same airport – so far, so good! 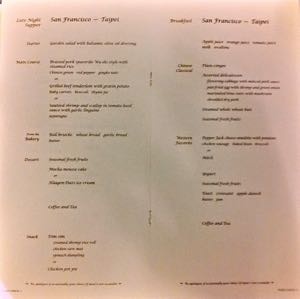 Service: The service on my first flight from San Francisco was professional, yet curt. I didn’t see a single smile, there was no welcome or anything but the bare minimum to deliver the food to my seat. When I went to the restroom, slightly groggy after a nap, one flight attendant pushed past me with a brusk “I’m cleaning that” and went in. While I appreciate them cleaning during a long flight and there was another bathroom available, it was an odd way to handle it. The service on my second flight was better: The flight attendant responsible for me introduced herself by name, was friendly and attentive throughout, spoke fluent English and delivered what I’d consider Business Class service. Beyond the much better attitude, it might have been helped by the fact that the cabin was almost empty, with only 4 out of 30 seats taken. 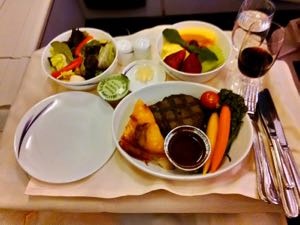 The meal service on the intercontinental flight started with pre-departure drinks (juice or water), followed by the dinner shortly after departure and breakfast before arrival (see photo). I chose the “Western” option for my dinner and all courses arrived on a single tray shortly after departure. I generally appreciate this type of quick service to maximize the time to sleep, yet on a 13 hour flight, I’d appreciate the courses being served individually at a more leisurely pace. My favorite way for airlines to handle it is to offer the option of express or regular service, so everybody can select what works best for them! The food quality was very good – better than United or ANA: The salad and fruit were fresh, the steak tender and the potatoes tasty. The ice cream (in a mini-carton) couldn’t compete with a Sundae served in a glass with all the trimmings though! Service was slow apart from delivering the tray – bread didn’t arrive till halfway through the meal and my water and wine glass were empty for most of the meal. The breakfast was served in the same way – single tray – but was not as good in quality: The eggs, sausage and croissant were all pretty dry and not very tasty, the coffee bad (major pet peeve for me after a long overnight flight). Overall, the food was nothing special, but competitive with other business class offerings – neither a reason to pick or avoid China Airlines. The service was disappointing – they made even the frequently grumpy United attendants look like a happy cheerleader! 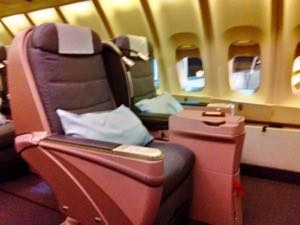 Hardproduct: Boeing B747: While the pre-departure and on-board service were still competitive for a business class offering in the North American market, the cabin and seat were not and a complete let-down: The good news was that I scored a seat in the upstairs cabin of the Boeing B747 – one of my favorite places to travel due to the small, private cabin.

China Airlines has recently started the roll-out of a new business class product, but unfortunately my plane was with an old configuration. And it’s VERY old, featuring recliner seats that recline 130 degrees according to SeatGuru and are far from flat (see photo above). While they are ok to sit during meals or to lounge, they are very uncomfortable to sleep. They have a 110V power outlet, but no USB port. The tray was large enough and stable, the video screen was stored in the armrest and unfolded to a good viewing position. I had the window seat with the storage cabinet next to the seat typical of the B747 upstairs cabin. Overall, these were the worst business class seat I’ve been in on a long-haul flight in the last 5-10 years and I would avoid them if at all possible. Unfortunately, SeatGuru does not have accurate information for China Airlines flights (mine was supposed to have a new configuration), so unless you can score a seat on their new Boeing B777-300ER, I would not recommend China Airlines for business class. 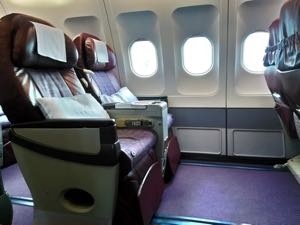 Airbus A340: After the bad seat on my first flight, I didn’t expect much for my second, short-haul flight. Instead of the scheduled B737 narrow-body plane, China Airlines was using an Airbus A340, typically used for longer routes. They also feature a recliner seat that was even older than on the B747, with less recline, leather upholstery, a smaller screen and a difficult to use controller. While this is competitive for a short-haul flight (even Singapore Airlines and Cathay Pacific have recliner seats for short routes), I wouldn’t want to be stuck on this plane for a long-haul flight and recommend you avoid them if possible.

After getting settled into the miserable seats, the entertainment offering (same on both flights) was a pleasant surprise: While the screen wasn’t great, the selection of movies, audio, games and information was above average. In addition to a number of recent movies and regional choices, there was a large selection of very popular, older movies, making it easy to spend your time. For fans of maps, you can actually choose of different options to track your flight!

Conclusion: China Airlines often offers business class tickets at much lower prices than competitors or has award availability when there are few other choices left. For those low prices, you get average service and food, slightly above average entertainment – and some of the worst seats in the business! For me, on a long flight, sleep and therefore the comfort of the seat are the most important thing when booking a business class ticket – and therefore China Airlines will be at the very bottom of my list until they have completed their NexGen renovation of their fleet. You are better off with other low-cost business class offerings, like Philippine Airlines (reviewed here), or a longer, connecting flight on a better airline on reward flights! International Business Class is a fiercely competitive market and China Airlines has a lot of catching up to do!