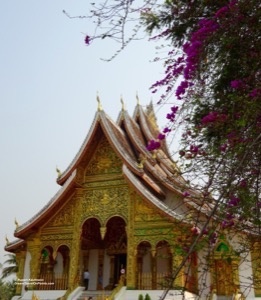 On my return trip to Luang Prabang after many years, I wanted to see how the museums and exhibits had improved over the years and the Royal Palace Museum  was top of my list. It has been nicely restored and is worth a visit, even if the word “Museum” usually has you running for the exits.

The Royal Palace is in the heart of town just below Mount Phuxi on the main road, so you can’t miss it with its white walls surrounding the premises. The first and most impressive sight is the only in 2011 completed temple Wat Ho Pha Bang. The multi-layered, steep roof decorated with lots of gold, on top of the white structure catches your eye. The entrance is lined by dragon sculptures along the staircase. The temple houses a golden standing buddha statue Pha Bang, the name-giver to the town! It came to Luang Prabang in 1512 (supposedly from Sri Lanka where it was cast in the 1st century) and was symbol of the royal dynasty. 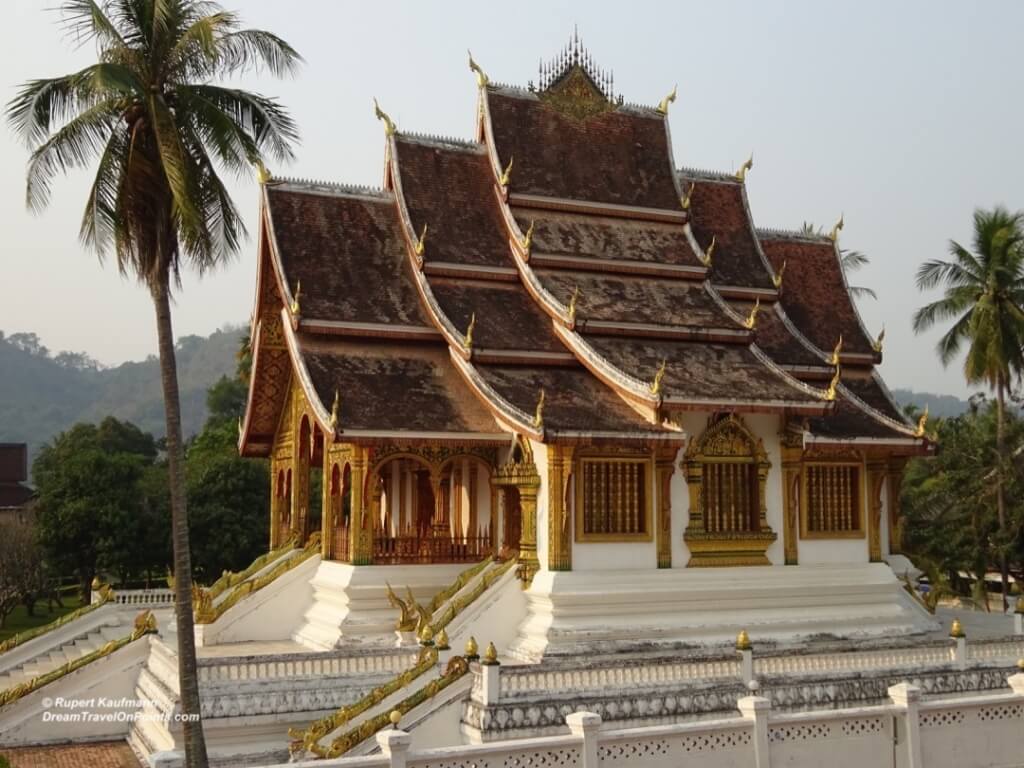 The Palace itself was built in 1904 with support from the French and was the residence of the Royal Family until they were deposed by the communists. You’ll approach it via a palm tree lined walkway and up a staircase to the main level. The main throne room is the most impressive sight in the palace. The walls are in a bright red and decorated with mosaics of colored, Japanese glass that form huge murals all around. Add to that the massive golden throne and lots of gold pain, and you have an impressive room that I’m sure served its purpose well on formal occasions. It’s an unusual decor that I have not seen anywhere else in this form. It was the result of a renovation in 1959 by the last King. Around the throne room you’ll find displays of ceremonial swords, buddha statues rescued from temples destroyed by Chinese bandits and other artifacts of the Royal family. Also worth seeing are the throne of the highest Lao Buddhist monk displayed in the front room and a row of bronze drums with intricate decors on top, displayed in one of the side rooms leading to the throne room. 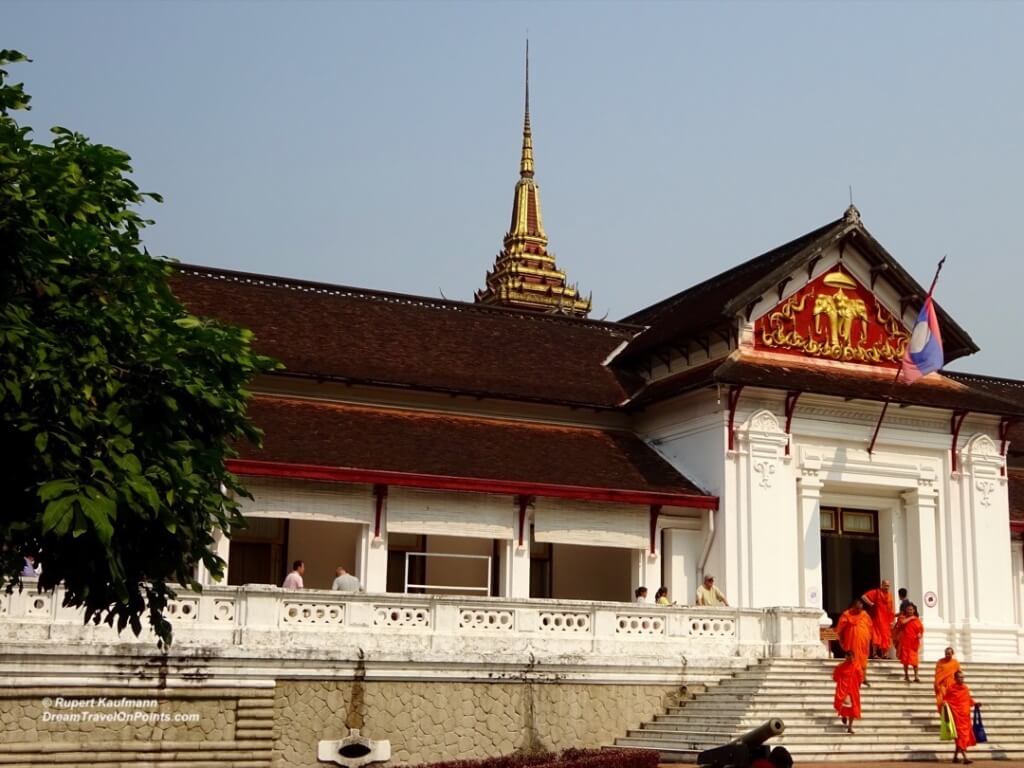 Behind the throne room, you will find the living quarters of the Royal Family, with the Queen’s bedroom, the King’s bedroom, a dining room and a music room with a number of instruments. All of it is well maintained, but feels rather spartan in comparison to the throne room.
Once you have seen the inside of the palace, don’t miss the small exhibit on the back of the palace. You can see a golden carriage used to move the Pha Bang buddha statue from the palace to the temple in 2011, as well as the cars of the King from the 50s and 60s, including two huge Lincoln Continental and a Ford Edsel! 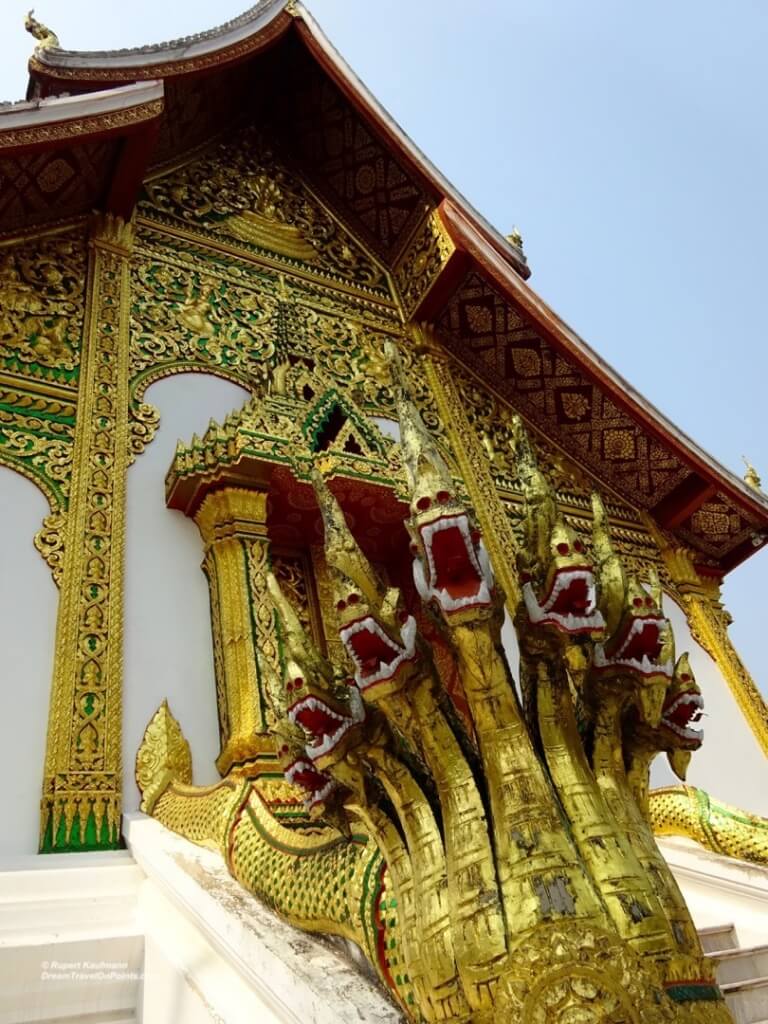 Visitor Tips: The palace is open for visitors every day except Tuesday from 8-11:30a and 1:30-4p (or so). There is a ticket booth to the right of the entrance where the rather bored staff will hand you a ticket (30,000 Kip or USD3,50). You’ll need it to enter the palace. Appropriate clothing is required, which according to the ticket includes “midriff, upper arms and upper legs covered; no hats”. I’d recommend to wear long pants to avoid hassle from a guard with a bad day. You’ll have to leave your shoes and bags near the entrance and – to my great disappointment – photography, even without flash, is not allowed in the palace or the temple. You can take pictures of the palace or temple from the outside and it’s still worth bringing a camera. The temple is very beautiful, even from the outside! You can get great shots of the temple from the hill across the street without the tourist crowds – it’s worth the few steps!