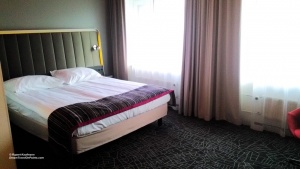 As my second home in Tallinn as part of my Baltic Explorer trip, I chose the Park Inn Central Tallinn. It was just a few blocks from the Old Town and my first hotel, the Radisson Blu Sky, it looked great in the online photos, had good reviews and I booked it at a price I hoped would turn out to be a bargain…

Location: The Park Inn is located off a main road, halfway between the ferry port and the old town. I was worried from the map that it is too far, but it’s only a 10 minute walk to either and there are two malls and lots of stores nearby. If you want to go further afield, there are a number of buses and trams passing right in front of the hotel, making it easy to get anywhere in Tallinn. It’s set back from the main road, so the rooms are quiet. It is in a low-rise building, so don’t expect great views from your room! 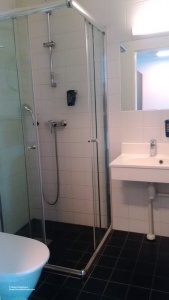 Service: Check in was friendly and quick, recognizing my Club Carlson status and offering an upgrade to a premium room, which I gladly accepted. Unfortunately, the staff was less than forthcoming when I inquired about the fitness area (none, to be built soon) and the sauna, which is listed as an amenity. I was told that I’d had to let them know 1h in advance to turn it on and request a key. When I came to pick up the key later that evening, I was asked how I’d like to pay for it! It’s bad enough to charge for an amenity that’s free anywhere else (at least in Northern Europe), but the expected fee of EUR27 for 1 hour was ridiculous and to not say a word until I’m ready to use it, is sneaky at best. To make it worse, despite declining to use it, the fee ended up on my bill and I had to fight with the staff to get it removed! This type of behaviour is unacceptable and a pet peeve of mine. I don’t mind paying for additional services – just be open and honest about it! Other than that occurrence (which involved three different people), the front desk was friendly and helpful. They printed boarding passes for me on request.  Housekeeping was thorough and responsive – I asked to clean when I left and found the room cleaned about 1 hour later. There are big tour groups staying at this hotel, causing chaos during breakfast and check-in/out and I tried to avoid them. 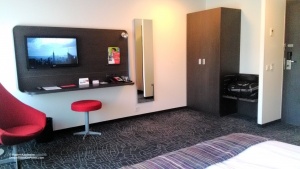 Room: The Premium room was in the colorful decor typical for Park Inn. It had a dark, patterned carpet, a red ceiling, a comfy queen size bed (with only two pillows though) and a work desk  with TV as well as a wardrobe (with laptop size safe) and luggage rack held in dark wood. A red chair in the corner and stool at the desk added another splash of color and some mood lighting around the bed and metal accents around the desk added a touch of style, making for a modern, comfortable environment. There are plenty of power outlets near the bed and work desk and the free wifi was strong, reliable and fast! With so many hotels these days offering “free” wifi that’s too slow to actually use, that was a great find! The bathroom was small and a little basic with small, white wall tiles and blue floor tiles. The square room had a toilet, a small sink and shower with little room around it. The toiletries provided were Dove soap and shampoo in wall mounted dispensers, which I’m ok with because it limits the waste of little plastic bottles. Surprisingly, the room lacked coffee/tea facilities (only available in Superior rooms and suites) or a fridge. The rooms have great air conditioning that is fully self-controlled with a temperature setting of your choice, instead of the common +/- a few degree dials typical in Europe that often range from hot to very hot settings in summer!

Amenities: You already know about the ridiculously expensive sauna – I went instead to the nearby Kalev Spa Hotel where you have access to a large, fully equipped gym, olympic size pool and multiple sauna, steam and jacuzzi for EUR14,50! The only other offer on site is a full-service restaurant. With so many good restaurants in walking distance, I did not try it, but it looks modern and clean. I missed an internet/printer station, but the front desk was happy to print for me.

Conclusion: Considering that I only paid EUR79 for two nights, thanks to the 2-for-1 weekend promotion for Club Carlson gold members, the room was a bargain. It’s a modern, clean and big room in a good, central location with great access to bus, tram, ferries and the Old Town. The service staff was generally friendly – I’d blame the management team for the ridiculous handling of the undisclosed sauna fee. Once you know about the sauna pricing and the tour groups, there is not a lot of downside otherwise. I’d stay here again at the right price and recommend it for anybody wanting a nice, clean room near the old town! If you ave a little bigger budget, it’s worth looking out for deals at the Radisson Blu Sky, which offers a world of difference!