I’m very interested in history and usually have the history or national museum of my destination on my itinerary. In the Baltics, I wanted to learn especially about the more recent history of these former Soviet republics. Estonia has established the excellent Museum of Occupations, covering the Soviet and German invasions during World War II as well as the post-war period until 1991 when Estonia regained its independence. It’s a tough topic, well represented and a museum worth visiting in Tallinn!

The museum starts with the secret side agreement between  Nazi Germany and the Soviet Union that assigned Estonia to the Soviet sphere of interest, leading to the initial occupation in 1940, followed by the subsequent invasion by Nazi Germany after the start of the war against the Soviet Union in 1941. The following phases are the re-occupation by and integration into the Soviet Union. I knew very little about the mass deportations into the Soviet gulags, the mass immigration of Russians, the ongoing resistance and the drastic changes to the society. While I knew about Glasnost and Perestroika and the fall of the Soviet Union, it was very interesting to learn how it played out in Estonia, leading ultimately to independence and the integration into the European Union and Nato. 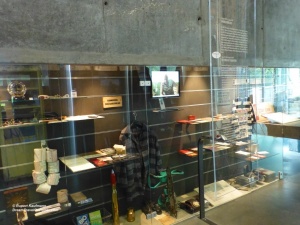 For each of the periods, there are glass cases with historic artefacts, like leaflets, posters, photos and household items or uniforms, even a few cars and computers can be seen. More importantly (for me), there are TV screens in each section with a historic overview of the period and the impact on Estonia. They use historic videos as well as interviews to provide insights into the period at great detail. Another section takes account on big boards of the impact on the different ethnic groups in Estonia, documenting the killing of the Jews by the Germans, the forced migration of Germans and voluntary flight of Estonians after the war, the mass deportation of Estonians to Siberia and the growth of the Russians from a small minority to 25% of the population today. I found it notable that most of the museum was focused on the Soviet occupation, the impact and scars it left.

If you want to go, you’ll find the museum on Kaarli Street, a short walk from Freedom Square and the old town. It’s open from 10:00 – 18:00 and closed on Mondays. The entrance fee is EUR6. Audio guides and tours are available, but not necessary given the detailed and well done videos. I would recommend the guide, if you don’t have a lot of time – the movies will require 2-3 hours in total. Given the tough topic, I’d not recommend it for children, until they are a little older! You can find more information here.